You are Here: Home » News » News Headlines » Littleborough resident hopes to inspire others to get moving

Littleborough resident hopes to inspire others to get moving 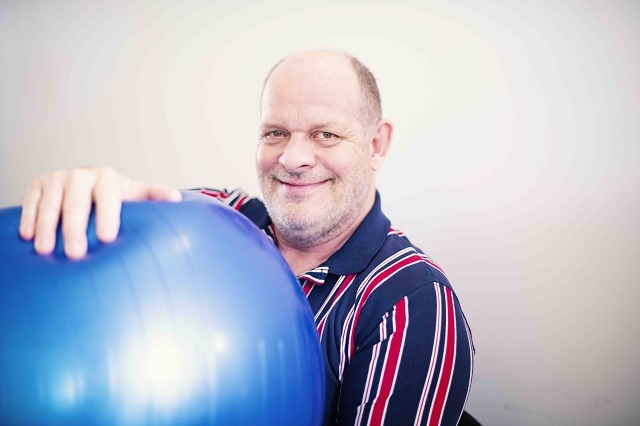 Alan Bramwell has more reasons than most people not to be active.

Born with a club foot on his right and a dislocated hip on his left, he was hospitalised for the first three years of his life while doctors attempted to repair the damage.

Now, aged 60, and after 15 operations to replace his hip and lengthen his leg, he is still suffering the effects of the disability.

Alan used to work as a private chauffeur and enjoyed his job driving chief executives up and down the country but was forced to take early retirement through ill health, aged 40. It was around this time he was also diagnosed with bi-polar disorder.

But Alan, from Littleborough, says regular exercise, which he enjoys at Recovery Republic Wellbeing Centre in Heywood, has been his instrumental in improving both his mental and physical health.

He now hopes his involvement in the That Counts! campaign will inspire others to get moving – no matter what their level of physical ability is.

Alan, who relies on two crutches to get around, said: “I’ve never been able to exercise very much because of my hip. I was hospitalised for the first three years of my life, and then again at eight – I missed quite a lot of school and couldn’t run around like the other kids. After breaking my hip and pelvis eight years ago, I could do even less. I put on weight, I felt unfit, and I felt sorry for myself.”

A complete hip replacement aged 45 meant that he was able to walk again and even start attending the gym, but he only enjoyed a few years crutch free before he fell and broke his hip and pelvis aged 52. Now he relies on two crutches at all time.

He said: “I was devastated. I put on three stone because I couldn’t move about and the medication for my bi-polar made me gain weight. I felt awful.

“I missed being active, I was overweight. It just made me feel unfit and very depressed.

“It affected me mentally. I’d get very down due to the fact I just couldn’t do as much, which then made the bi-polar worse, and vice versa.”

Alan lives with his partner, Julie, her son, Dan, and Dan’s girlfriend, Tasha. He was encouraged to go along to Recovery Republic in Heywood by his case worker.

First, he joined the men’s group and then started to take part in the Friday low-level fitness class, which involves chair-based exercises, resistance training, and throwing and catching balls.

Alan said: “The great thing about this low-level exercise is that it suits me and the instructor tailors it to my level of ability – he does that for all of us. He never over-exerts us, but without realising it we’re all doing a little more each week.

“It keeps me active and flexible. And it makes me feel good! I’m not going to the gym working out, but I’m exercising enough to give me a buzz. It’s just an hour a week, but it all counts!”

Alan’s experience of moving more found him being nominated to star in the That Counts! healthy movement campaign. A film made about Alan will be featured on the @ThatCountsGM social media channels in an effort to inspire others.

Alan said: “Just making these small movements and doing simple strength exercises has really helped me. It helps relax you, it makes you feel positive, I’ve made new friends and it’s fun. I want my experiences to encourage others to do the same.

He added: “I’m still working on losing weight, I have to watch what I’m eating, but I am definitely getting fitter. Mentally I feel much better as I’m getting an endorphin boost from the activity and that really picks me up by the end of each session.”

He added: “I’ve overcome a lot, but I still do what I can to move a bit more each week. Anyone else who thinks they’re too ill or too old to be active will actually find it’s what they need to stop them sitting at home and feeling sorry for themselves. You can get out of negative thinking just by doing a bit more each day and week.”

That Counts! is an ambitious campaign that aims to get two million people in Greater Manchester moving by 2021.

Starring people from across its 10 boroughs, the That Counts! campaign is encouraging people to move more in a way that suits them, giving a clear daily active movement target (30 minutes) to start aiming for. Everything will count, from walking to school to dancing while doing the vacuuming, to getting off the bus a stop early after coming back from the shops.

Sport England chose Greater Manchester to work on the new approach to help build healthier, more active communities across the country. Fuelled by £10m funding, it is the biggest of a series of regionally-created initiatives and the only one happening in the North West.