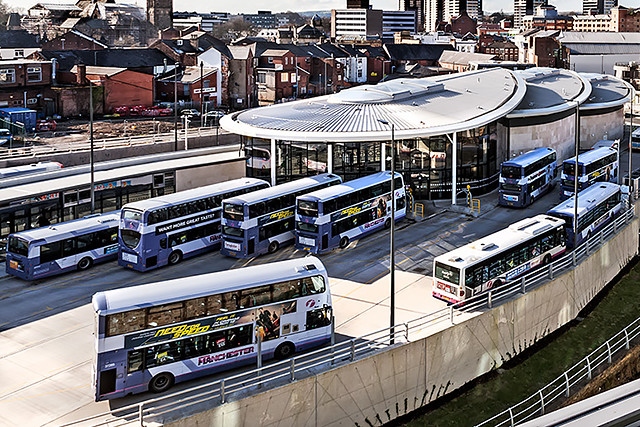 Greater Manchester will consult on bringing the region’s bus network back into public control - making it the first place in the country to use new powers over buses.

Council leaders gave their unanimous support to their franchising plan, which could cost more than £134 million to implement.

Bus operators such as Stagecoach have long opposed reform, while Labour politicians and unions have given their backing.

It has been suggested that a move to a London-style bus network could be supported with government funding.

Under the proposals, mayor Andy Burnham and fellow Greater Manchester leaders would take over route planning, fare setting and connecting the bus network with other forms of public transport through a franchised system.

A public consultation on the plans will start on October 14, with members of the public urged to have their say on the matters.

If approved, Greater Manchester would be the first region to bring back regulation since Margaret Thatcher privatised all bus networks outside of London in 1986.

At a meeting of the combined authority on Monday, Trafford council leader Andrew Western said: “I think it’s absolutely right that we have a transport system in Greater Manchester that is fit for purpose.”

With the government recently announcing a ‘long term funding package’ for authorities with aspirations of franchising, Councillor Fielding said prime minister Boris Johnson ‘gets it’ having served as the capital’s former mayor.

“I hope that he does follow through with the money it seems like he’s pledging to support,” he said.

Councillor Fielding also said bus operators are currently unaccountable, telling colleagues how as a council leader he is reduced to ‘tweeting like a troll’ at First in order to get answers about basic service problems.

He asked: “If I can’t even get accountability and get First to act upon the concerns I’m raising, then what hope does a member of the public have?”

Bus regulation has been high on the agenda of regional Labour politicians ever since the signing of the devolution deal in 2014.

The bus industry consortium OneBus has estimated that tax rises will go up to £68.10 a year for the average household.

Gary Nolan, chief executive of OneBus, says their own £100 million partnership proposals would ‘deliver the transformation people want to see far quicker than a franchising model, and without additional cost for taxpayers’.

However, Salford’s deputy mayor John Merry suggested ‘disinformation about the alleged cost of franchising’ had been spread by objectors.

Speaking at Monday’s meeting, Mr Merry said: “I know that the system as it stands at the moment is fragmented and chaotic and I’m looking to a franchised system to bring a degree of stability and order.”

A spokesperson for Stagecoach, which operates many buses across Greater Manchester, said: "Buses are the cornerstone of Greater Manchester’s economy and communities. It’s crucial that both people who use the bus, and those who don’t, have their say on the future of bus services, because local taxpayers would ultimately foot the bill for franchising.

“Greater Manchester residents have an alternative option, and it is not a choice between the bus service they have now or franchising. Partnership proposals developed by bus operators will deliver multi-million-pound investment in integrated ticketing, better value fares, electric buses and many more improvements - all much sooner than through franchising and with bus companies rather than taxpayers covering the cost.

“The huge cost of franchising our buses could be better spent on investing in social care, schools and policing - as well as tackling crippling road congestion, which is the biggest barrier to providing better and more attractive bus services.

“We would urge the people of Greater Manchester to consider the options for bus services and their implications very carefully. If local people want to see lower fares, a more joined-up transport system, and investment in their bus services without a massive bill, they should choose partnership and reject franchising.”

The consultation will go live at 12pm on October 14 at: