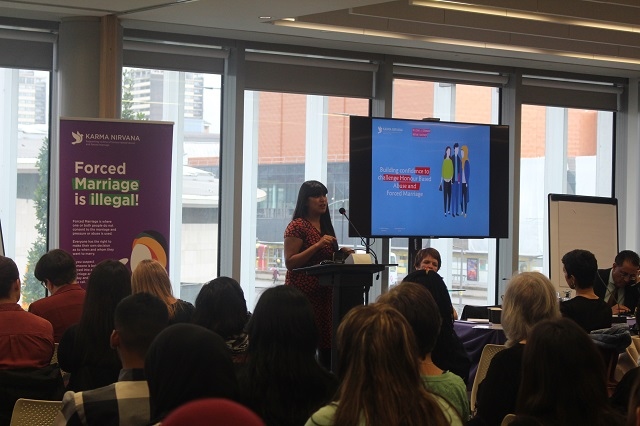 National charity Karma Nirvana highlighted the importance of tackling honour-based abuse and challenging extremist behaviour at an event in Rochdale.

The conference, hosted by Rochdale Borough Council, was part of the charity’s work to tackle complex safeguarding and raise awareness among professionals, voluntary sector organisations and community members who support victims across the borough.

As well as survivors of honour-based abuse and forced marriages, speakers included Nazir Afzal, the former chief prosecutor at the Crown Prosecution Srvice and a keen supporter of work to support survivors; and Karma Nirvana’s executive director Natasha Rattu who spoke about how to better identify and support victims

Gail Hopper, director of children’s services at Rochdale Borough Council and the chair of the complex safeguarding strategic group, told the conference that the organisations that make up Rochdale’s safeguarding partnerships for children and adults work together to tackle all forms of exploitation, risk and harm. She said that increasing awareness and effectively identifying and addressing honour-based violence and forced marriage is a key priority in the borough.

Honour based abuse can affect anyone regardless of age, faith, gender or sexuality and can involve multiple perpetrators from a victim's immediate and extended family and sometimes members of the community at large.

The roadshow, which is one of a series of ten, is supported by the Home Office’s – Building a Stronger Britain Together programme. The programme supports the creation of resilient communities and stands up to extremism.

Councillor Janet Emsley, cabinet member for neighbourhoods, community and culture at Rochdale Borough Council, said: “We know honour-based abuse happens in our borough so it was important for us to take this opportunity to educate professionals working with people impacted by it.

“The conference was excellent and has helped us to better understand how to prevent honour-based abuse and how to tackle it and support victims when it occurs.”

Karma Nirvana operates the only national helpline for victims of honour-based abuse and forced marriage.

If you or someone you know is experiencing honour based abuse or is at risk of a forced marriage please call 0800 5999 247, email info@karmanirvana.org.uk or visit: