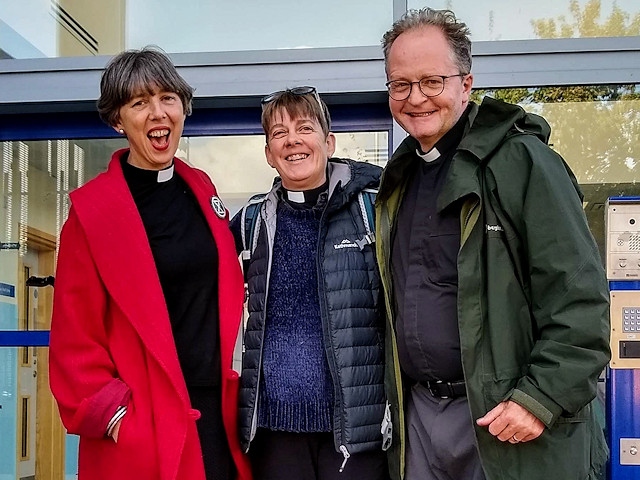 Reverend Mark Coleman, Vicar of St Chad’s Parish Church in Rochdale, was one of over 270 people arrested during the Extinction Rebellion protests in London on Monday (7 October).

For two weeks, Extinction Rebellion and allied movements are gathering in major cities across the globe to protest against the climate crisis.

Speaking after his release, Revd. Coleman described his arrest: “’Sir, I am arresting you’. I can't remember exactly what followed. I mumbled an absurd ‘no comment’ to the question, ‘Do you understand?’ And so, I was arrested for the first time in my life.

“I hope and pray that my arrest, along with that of over 270 others that day alone, may help make the climate emergency a priority for politicians, so that my parishioners in Rochdale may have a chance of life in all its fullness.

“I support the Extinction Rebellion demands of the government telling the truth, of the decarbonisation of our economy by 2025, and of citizens getting together in an assembly to map the way forward.

“People of all faiths and no faith are involved in these events in London. I prayed on Monday with Muslims on Lambeth Bridge, touching the hard tarmac three times with my forehead.

“The experience of being arrested was at times frightening. I am so grateful to Christian Climate Action and Extinction Rebellion for the training, and the many prayers of people back in Rochdale.

“Later we three priests and other activists shared biscuits and chocolate as we sat together on the hard floors in a holding area at Croydon custody suite. The large number of 'rebels' in the arrest processing queue gave us lots of time to share stories, laugh, and talk about our lives, faith and the Church. Scriptures were shared by the anti-fracking activist from Lancashire. It felt like a very sacred space as we sat there.

“At 2am, I said farewell to my arresting officer, Sophie. We shook hands, a different sort of contact from being seized by her and another officer 10 hours earlier.

"’Police, we love you,’ had been one of the chants earlier. It was – and is – true. They are just doing their job. I am so grateful to have been able to get to know these officers and something of their lives.”

Revd. Coleman will be reading from the Book of Revelation on the steps of the National Gallery on Wednesday (9 October).

Launched in 2018, Extinction Rebellion is an international movement which wants the world’s governments to declare a "climate and ecological emergency" and take immediate action to address climate change.

Hundreds of people were arrested at the group's London protests in April.

Its origins can be traced to a group called Rising Up!, created in 2016 by a small group of activists.