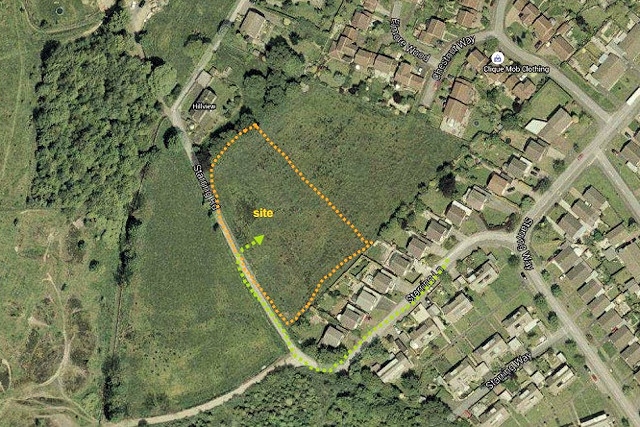 The site off Starring Road, in Littleborough

Rochdale Council’s planning committee has deferred a decision on an application from Hoyle Developments to raise floor levels on homes it is building at land off Starring Road, in Littleborough.

They want the company to answer questions after it emerged the houses had not been built in line with planning approval it received in 2017.

But the developer – which would lower roofs to compensate raising floor levels – says it has done little wrong and is being targeted by residents who do not want the houses built.

The issue arose after people in the area complained the seven homes were not being built in line with the planning permission granted.

No one from the firm was present when the application was heard by planning chiefs, but Maria Thompson did address the committee on behalf of residents.

Ms Thompson, of Starring Lane, told the meeting the development had been ‘characterised by non-compliance with the approved plans again and again’.

She said the homes ‘virtually destroyed the view of the hills and Blackstone Edge and their two-and-a-half storey height was ‘completely overbearing and looming over Starring Lane residents and not in any way in keeping with surrounding properties’.

Ms Thompson also said the raised floor – or slab – heights had contributed to unprecedented flooding in Starring Lane, as it meant gardens could not be levelled and water was running off the site.

She added that lowering slab levels and levelling gardens could be done without causing ‘undue hardship to the builder’.

A water main, not included on United Utilities plans was said to have created problems on the site, and there were complaints a dry-stone wall had been demolished and not rebuilt as per the plans.

Other concerns included the arrival of hardcore on the site from an unknown source.

Councillors also heard Plot Four would still be higher than the original plans, as the lowering of the roof height did not fully compensate.

Councillor John Taylor said he regretted that no one from Hoyle Development was present. He added: “I really did want to ask how this this happened.

“In my view, it’s one of two ways – either total disregard for the planning application and the conditions or absolute incompetence seven times over in each one of these houses.”

Councillors agreed to defer a decision on the application to a later date so the developer could come and answer their questions.

But Steve Hoyle – owner of Hoyle Developments – said he had not attended on the advice of his architect but would ‘100 per cent’ be at the next meeting.

Speaking after the meeting, he said that the floor heights of the buildings had been raised as the incline would otherwise be too steep, meaning people would not be able to get up their driveways in icy or snowy weather.

But he said the ridges – or roof heights – had been altered to compensate, and changes were only a matter of centimetres.

Referring to residents he said: “It’s a quango committee up there, that will do anything to stop that development going ahead. The people around there have been against it since day one. They are videoing us from bedroom windows, it’s just ridiculous.”

But of the council’s demands, he said: “Whatever they want us to do, we will do and let’s get on with the job.”

Mr Hoyle added that the dry-stone wall was ‘three-quarters’ rubble, had been demolished under expert supervision and could not be rebuilt.

He also said that the hardcore had been acquired from a reputable company, was fully certified, and there was ‘no contaminated material on the site’.

The builder accepted that there had been flooding in Starring Lane but put this down to ‘unprecedent rainfall’.

He said an attenuation tank (water storage tank) is due to be installed on the site once work on the road is completed.