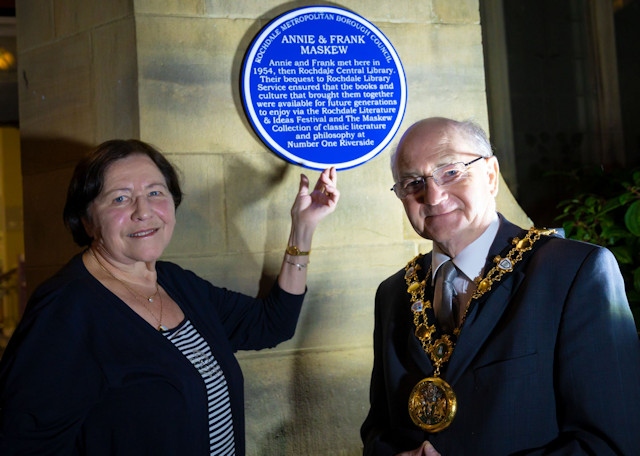 The plaque was unveiled at Touchstones Arts and Heritage Centre by Val Perkin, a lifelong friend of Annie Maskew, and the Mayor of Rochdale, councillor Billy Sheerin

Rochdale Literature & Ideas Festival 2019 opened on Monday (14 October), with a blue plaque commemorating the couple who made it all possible being unveiled.

Annie and Frank Maskew, a Rochdale couple who shared a passion for reading and thinking, met in Rochdale Library in 1954. They were an inspirational couple, devoted to inspiring others with their love of literature and left a sum of money to be used on resources and events related to literature and philosophy to ensure classic works are available for future generations.

Their bequest helped create the Rochdale Literature & Ideas Festival which has been running since 2013. Special events are also held throughout the year and the Maskew Collection of English Literature and Philosophy resources is housed at Rochdale Central Library.

The plaque was unveiled at Touchstones Arts and Heritage Centre by Val Perkin, a lifelong friend of Annie Maskew, and the Mayor of Rochdale, councillor Billy Sheerin. Touchstones used to be the home of Rochdale Library, where the Maskews originally met.

The evening also saw the debut of a specially-commissioned graphic novel by Helen Bate telling the story of how Annie and Frank met and the impact their generosity has had for the library, arts and culture in Rochdale.

Councillor Janet Emsley, cabinet member for neighbourhoods, community and culture at Rochdale Borough Council said: “We are honoured to be able to recognise Annie and Frank and the contribution they have made to the lives of the people of Rochdale. Without the Maskews’ generosity and foresight, events like Rochdale Literature & Ideas Festival would not exist, and thousands of people of this borough and further afield would not have been able to access literature, arts, culture and philosophy. I hope Annie and Frank would have been very proud to see people of all ages coming to their beloved hometown to enjoy the festival this week.”

To find out more and book tickets visit:

The festival is organised by Rochdale Borough Council, supported by the Maskew Bequest and sponsored by creative digital media company - JGM Agency, The Royal Toby, and Rochdale Sixth Form College.