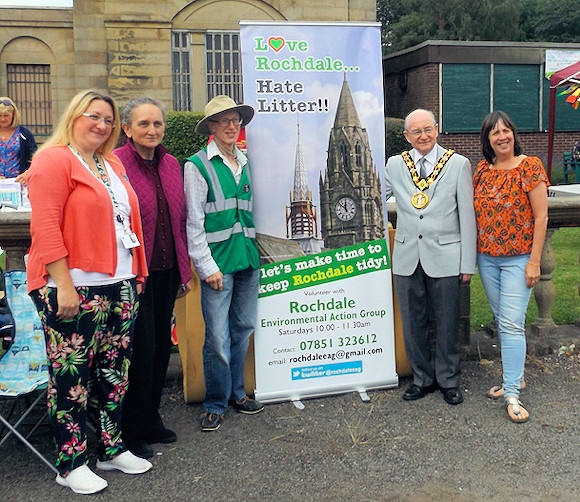 Vintage Worx, which aims to reduce social isolation and restore the urban area around Falinge Park, has been awarded £20,000 from People’s Health Trust with money raised by Health Lottery North West, to provide a range of social activity groups, such as crafts, upcycling and sweet-making classes, which take place in the leafy-green of Falinge Park.

The project is enabling Rochdale residents with shared interests to come together and by doing so, enrich their lives by encouraging them out of their houses and into the company of others.

Tracie Powers at Vintage Worx said: “Many of the project members do have family, but for others we recognise that without the classes, these people would likely be at home either alone or with very little social contact.”

She continued: “There are a number of high-rise flats close to the park, so with limited access to gardens and a growing desire to sit at home on smart phones, even the elderly residents aren’t leaving home anymore. We’re here to ensure that the most vulnerable of adults in the local area have reason to get up and leave the house each day - it can be as simple as a conversation over a coffee.”

Vintage Worx group activities give members an opportunity to bond over shared interests and allows them to maximise their full potential through learning a new hobby or craft.

One of the main successes of the project is that members have built friendships which extend beyond the project meet-up days, and these people have started to take ownership of the group activities and steer the project beyond the funding end date.

Tracie added: “Two of the project members organised an Around the World event, which attracted 400 – 500 locals and enabled people to showcase local delicacies from their home country and educate on their culture.

“On the whole, there was very little for us to organise as the group planned and led the event themselves – which they were very proud of!”

Money raised by Health Lottery North West is continuing to support local projects and has raised over £10.5m in funds to support 317 projects to date in the region.

Martin Ellice, Joint Managing Director of The Health Lottery, said: “We’re delighted to support Vintage Worx as it’s such a vital project in Rochdale, ensuring vulnerable people are getting outdoors and meeting others.”

To date, The Health Lottery has raised over £110 million to support local charities across England, Scotland and Wales.