You are Here: Home » News » News Headlines » 82-year-old woman attacked and robbed for her pension book

82-year-old woman attacked and robbed for her pension book 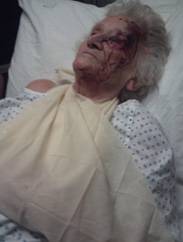 An 82-year-old Rochdale woman was left with serious head injuries after a robber assaulted her for her pension.

The victim was returning home from the post office shortly before midday on Tuesday 19 August 2008 when she was approached from behind by a man as she entered an alleyway off nearby Greenbank Road, Rochdale.

The offender grabbed her and wrapped his arm around her chest and spun her, causing her to fall. He then stole her pension money and house keys.

She suffered injuries to her head and a broken wrist and was taken to Rochdale Infirmary for treatment. She is currently in a stable condition.

The offender is described as white about 5ft 8in tall, of medium build, in his late 20s or early 30s with fair hair and possibly has a goatee beard or is unshaven. He was wearing jeans and a khaki-coloured jacket.

Inspector James Troisi of Rochdale North neighbourhood policing team said: "This was a shocking attack on a vulnerable woman who was walking home from the post office.

"We believe he targeted his victim, following her from the post office to the alleyway.

"To attack a defenceless pensioner like this is pathetic, however, this man is clearly dangerous and needs to be caught.

"I must stress that this type of incident is extremely rare in this part of Rochdale and I want to reassure residents, particularly elderly people, that we have a dedicated team of officers working on this.

"I want to appeal to anyone who may have witnessed the attack, or who may have seen someone acting suspiciously between the Hamer Post Office and the alleyway to come forward."