You are Here: Home » News » News Headlines » Local resident Naveed and Liz McInnes call for an end to palliative care issues at Parliament 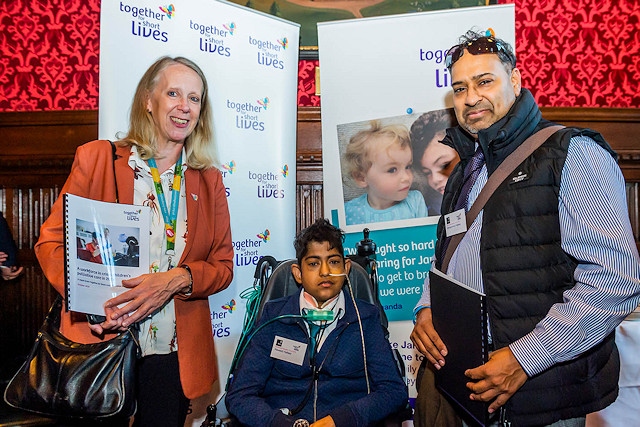 Liz McInnes with Naveed Hafeez (centre) and his dad

Before parliament was dissolved on Wednesday 6 November, Naveed and his parents travelled to Westminster to attend a reception held by the cross-party parliamentary group for Children Who Need Palliative Care, which seeks to influence members to take action to transform the lives of children across the UK with life-limiting and life-threatening conditions.

The reception also acted as the launch for a new report by the children’s palliative care charity, Together for Short Lives, which shows a growing shortage of healthcare professionals across England that is leading to seriously ill children and their families losing out on vital care and support.

In response to the report’s findings Ms McInnes said: “It is vital that terminally ill children can access sustainably-staffed children’s palliative care. Together for Short Lives’ report reveals a concerning shortage of nurses, consultants and other health professionals, meaning families can be left without the respite they need to recharge their batteries and keep going.”

The report found that there are just 15 children’s palliative care consultants in the UK – the Royal College of Paediatrics and Child Health (RCPCH) suggests there should be 40-60. In addition, it said there are too few NHS community children’s nurses, specialist consultants in paediatric palliative medicine, children’s hospice nurses and allied health professionals.

Ms McInnes, Naveed, his family and Together for Short Lives are calling on the government to take action by ensuring that the NHS People Plan includes specific action to end this workforce crisis.

Andy Fletcher, Chief Executive of Together for Short Lives, said: “It is imperative that ministers make sure the NHS People Plan sets out a programme to boost the number of professionals working with these children in the NHS and voluntary sector, in hospitals, children’s hospices and the community.”

Naveed and his family spent the day in Westminster and were also given a tour of Parliament. Alongside Ms Mcinnes, Naveed met and talked with several then-MPs, including Stephen Twigg, Minister Caroline Dinenage, and the DUP’s Jim Shannon.

About the day, Ms McInnes said: “Naveed was quite the star today. He enjoyed his tour around Parliament and meeting lots of MPs.

“He is very interested in politics and wants to be an MP himself someday so really enjoyed the tour around Parliament and the chance to chat to MPs.”