You are Here: Home » News » News Headlines » Schoolgirl Imogen O'Brien will have her festive scene of Birch Hill on thousands of Christmas cards 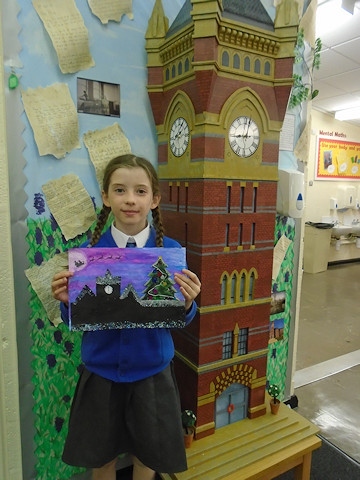 A clear Christmas Eve night depicting Birch Hill and a colourful Christmas tree as the unmistakable silhouette of Father Christmas and his reindeer swoop past has been chosen as a winning Christmas card design at St Andrew’s School in Dearnley.

Created by Year Four pupil Imogen O'Brien, from Magpie Class, the design will feature on thousands of Christmas cards posted throughout the Wardle and West Littleborough ward.

Imogen was presented with a special prize of a Frozen-themed art set and certificate during Monday morning’s assembly by local ward councillors, Ashley Dearnley, Rina Paolucci and John Taylor.

Deputy headteacher Jane Hodgson said: “Imogen’s entry was chosen as the winning entry because it depicted the iconic Birch Hill clock tower in the Christmas scene.

“The councillors really liked the watercolour wash she had used for the night sky with Father Christmas flying in front of the moon delivering presents and the way the glitter had been used as snow on the roof tops below.”

Councillor Paolucci said: “Congratulations to Imogen, whose stunning design was chosen as the winner by the school.”

The councillors took part in a special assembly and toured the school.