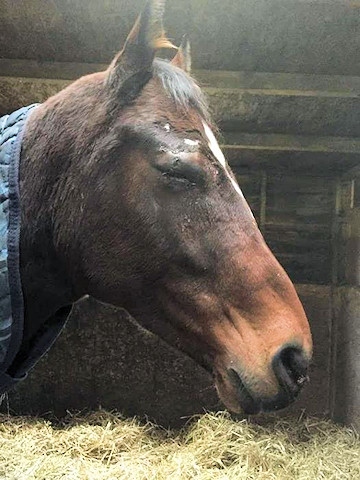 Harry's eyelid has been stitched back on

Local charity Pastures New are appealing for the public’s help with their veterinary bills after a recent incident at the farm.

On Saturday 2 November, seven ex-racehorses escaped the equestrian facility in Littleborough and as a result, suffered substantial injuries between them and will need ongoing care.

Galloping into a 50mph zone heading towards Blackstone Edge, Jacqui Taylor, founder of Pastures New, described how she jumped into her car in ‘hot pursuit’ to catch the horses, who are retired from or were previously injured by racing.

In a Facebook post on 2 November, Jacqui told of the ordeal: “Today the horses got out the gate; either I left it open (doubtful) or someone else did, or one of them opened it.

“They set off down the lane as only racehorses can and hit the main road running. I grabbed one before leaving the farm and put him in, but on my own it was only one.

“I caught up with them heading towards Blackstone Edge, pulled ahead of them flashing oncoming vehicles and finally veered them into a side road.

“Daisy was left behind but was later caught and Dan was boxed at Sheps Farm; he couldn’t put his right back leg down, I thought it was broken. These are the two now in emergency care at Hird and Partners [equestrian hospital in Halifax].

“I caught up with more horses outside The Rake; Harry with his eyelid hanging off and Musca, another lame and exhausted. They had probably done 5 miles on tarmac by now.

“One horse also went down the canal tow path and two set off towards Rochdale and were eventually caught. Seven horses all in a bad way.”

“I feel grateful for the help, and that no person was hurt. I know things could have been 100% worse. I can’t even consider what the bills are.” 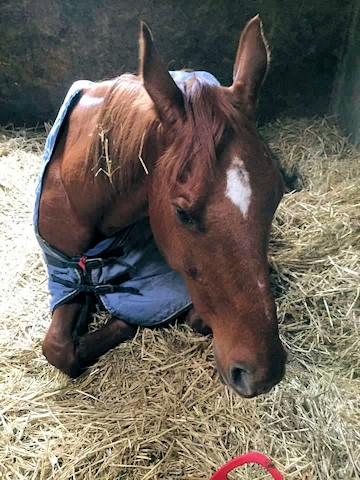 In a more recent post, she added: “The community were amazing, there are so many people to thank. Time will tell how life changing their injuries are.

“Everyone on the scenes, some I know, some I don’t, went over and above. Horse owners arrived in droves with more boiled water, more fleeces, more headcollars and people brought horses back having got their own trailers.

“I thank everyone in our community who has helped, who called people that could help, and who I’m hoping will help now...

“My own three horses are amongst those most injured – Cassie, Harry and Daisy - and they are my responsibility, but if I can ask the local shops/cafes to get in contact if you are willing to have a collection box, spread the word and ask children and adults to fundraise, and individuals to donate online for the horses.

“Dan who has nerve damage is in the equine hospital in Halifax, but we are hopeful with anti-inflammatory and rehab he should make a reasonable recovery, and Musca, JJ and Guv are being treated by Mellings.”

Granted charitable status in 2012, Pastures New is operated by Jacqui Taylor at a small 25-acre farm in Littleborough, providing a safe and secure future for retired racehorses.

Jacqui and her team of trustees are dedicated to the rehabilitation, retraining and re-homing of retired and injured racehorses.

To donate to Pastures New and help with the recent veterinary bills, please visit:

A fundraising event will also be held at Littleborough Cricket Club on Sunday 24 November:

Update 18 November - the event was previously due to be held at Littleborough Boxing Club, but will now be held at the cricket club