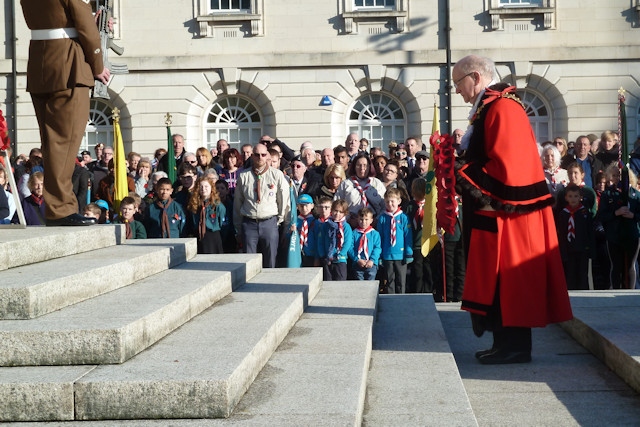 Mayor Billy Sheerin before laying a wreath on Remembrance Sunday

Thousands of people turned out to pay their respects at the Remembrance Sunday service at Rochdale Cenotaph on 10 November, honouring those who died serving their country.

Wing Commander David Forbes DL, President of the Rochdale branch of the Royal British Legion, opened the service in Rochdale centre with The Exhortation after the clock tower struck 11am:

They shall grow not old, As we that are left grow old;

Age shall not weary them, Nor the years condemn.

At the going down of the sun, And in the morning,

We will remember them.

The Last Post was sounded and those bearing standards lowered them for the two-minute silence.

Wreaths were laid by Mayor Billy Sheerin; the president of the Legion; the saluting officer; the Deputy Lieutenant of Greater Manchester; party leaders; representatives of the three armed forces; police, fire and ambulance officers; the Royal British Legion and other ex-service organisations; magistrates and representatives from churches and mosques.

Other organisations, including Brownies, Guides and Scouts, and members of the public also laid their wreaths. A wreath was laid on behalf of Asian families settled in Rochdale by Ghulam Rasul Shahzad OBE.

The Reverend Margaret Smith, Town Centre Chaplain, sang the hymn 'By A Monument of Marble', inviting the public to accompany her after the first verse.

A prayer and a reading from the Gospel according to St John were read, followed by a Universal Peace Prayer and the hymn 'O God, Our Help in Ages Past' and the Lord’s Prayer, read by Reverend Mark Coleman, Vicar of Rochdale.

The Blessing and the National Anthem closed the service, before the parade marched along The Esplanade and in front of the Town Hall.

Mayor Sheerin said: “It was a very special and emotional event for me, having lost my grandfather in World War One.

“My brother also served in the Lancashire Fusiliers, and my sister was a sister in the Queen Alexandra Royal Nursing Corps, so my family has had contacts with the forces for over a century. It was not difficult to be thinking of them all at such a very special event, and I did so with pride and thanksgiving.

“The sun shone on us, the music was excellent, the crowds were amazing, and the parade was outstanding.

“Rochdale did us proud in our remembrance of the fallen.”

Mr Shahzad said: "I would like to thank the British Legion, Rochdale Borough Council, all organisations and people of the borough of Rochdale for their support. Our ancestors served the British Army and the government in the First and Second World Wars in which thousands were killed, wounded and have never been found.

“Remembrance Day provides us with the opportunity to remember all our fallen heroes who sacrificed their yesterday to give us our today.”

Wooden crosses adorned with poppies had also been added to the Memorial Gardens, some bearing the names of those who had fought in the wars, whilst others recognised the sacrifice given by all who gave their lives.