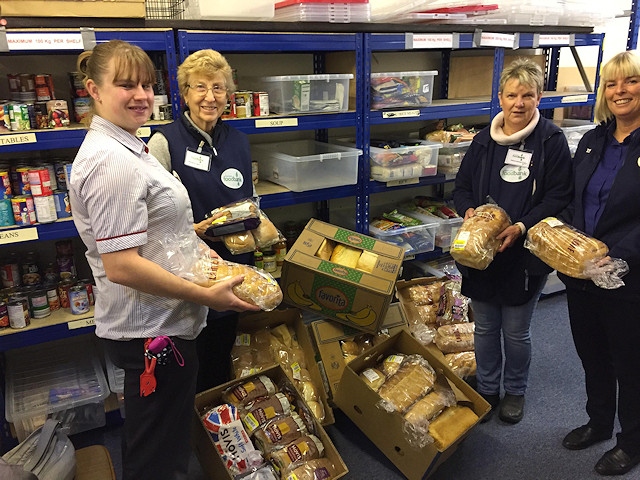 Donating bread to the Rochdale Foodbank on 7 November

The Tesco supermarket at Sudden will be holding a collection for Rochdale Foodbank between 21 and 23 November, as part of the annual Tesco Food Collection.

Every night, all of Tesco’s excess food is donated to charities like the Trussell Trust, which supports a nationwide network of foodbanks, including Rochdale.

The food donated to foodbanks in The Trussell Trust’s network is given in emergency food parcels to people referred because they cannot afford to feed themselves and their families.

Between April 2018 and March 2019, foodbanks in the network provided a record 1.6 million food supplies to people in crisis, a 19% increase on the previous year.

Donations made at Sudden will go directly to the Rochdale Foodbank, the store’s community champion, Angie Gilbertson, confirmed.

Rochdale Foodbank has now been operating for seven years, after it was set up in 2012 by Iain and Margaret Wight.

The foodbank operates on a voucher system, provided by over 130 agencies in Rochdale who have identified people in crisis, who may struggle to buy food.

The voucher is honoured like a cheque, in exchange for three-days’ worth of goods.

Last year, more than 6,600 three-day emergency food supplies were given to people in crisis at Rochdale Foodbank, providing more than 2,200 children with provisions.

John Rowe, from Rochdale Foodbank, said: “We have had an amazing number of donations from Harvest collections in local schools and churches so that our stores are now replenished having been very low by the end of the summer.

“We are still hoping that the people of Rochdale will once again show their phenomenal generosity during the three-day collection at Tesco's Store, so that we will be able to feed our clients throughout the next year.

“We will welcome donations of any of the foods on our list, but we particularly need long-life milk, sugar, tinned meat and fish and small jars of instant coffee.”