You are Here: Home » News » News Headlines » Businesses fear for jobs as plans to build 250 homes on industrial estate emerge 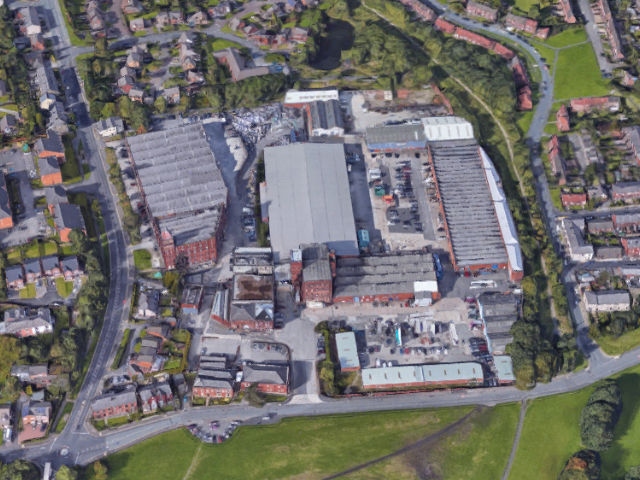 Business owners have been left fearing for their livelihoods after a bombshell letter revealed plans to sell off an industrial estate for up to 260 new homes.

Employers at Fieldhouse Industrial Estate, in Rochdale, say as many as 1,000 jobs could be lost if the scheme goes ahead.

Firms had their worst fears realised when landlord BizSpace wrote to them confirming plans to redevelop the site were being ‘explored’.

A letter to around 70 businesses says a housebuilder has shown interest in buying the site – off Whitworth Road – and ‘converting it for residential use’.

However, it stresses the proposal is ‘absolutely not a done deal’ and would be subject to planning consent.

Acting on behalf of BizSpace, property consultants Rapleys has stated it anticipates ‘a planning application being progressed during 2019’ with the homes being built over the next five years.

Rapleys claims the 5.3 hectare site – which includes Fieldhouse Mill – could ‘deliver between 250-260 residential units’ and make a ‘significant contribution’ to the borough’s housing need.

Companies based at the industrial estate say any such move would come as a crushing blow and many would struggle to relocate.

Dave McCann, who owns Pioneer Gas Ltd, said suspicions had already been aroused due to surveying activity on the site – and said the future now looked bleak.

“They are treating everyone on the site really badly and I think we have got 12 months maximum before the place is shut and knocked down.

“People are now starting drilling holes and once the soil samples come back okay – and they should do, it was only a cotton mill – that’s it.

“There’s nowhere to move to, and then there’s the cost of moving which is obviously extortionate.”

Mr McCann moved his business to Fieldhouse Industrial Estate five years ago and says it has taken time to get the message out to all of his old customers – some of whom thought he had stopped trading.

He added: “Now, I’m established there properly and I’m going to have to move again – the impact financially is going to be astronomical and there’s cost of moving and advertising.”

The business owner also spoke of his concerns over people’s jobs.

“The industrial site does no harm – there’s 70 businesses there – some are big business that employ a lot of people,” said Mr McCann.

“There must be hundreds of people who work here, one firm must have 80 people, Hetherington Office Supplies has 10 girls just in the office.”

Rochdale Council wants at least 460 homes to be built in the borough every year, to ensure housing supply is meeting demand.

It is also committed to developing on brownfield sites where possible.

Mr McCann says businesses will fight plans to clear Fieldhouse Industrial Estate for housing but feels they will be up against the odds.

He said: “We are going to fight it, but I’m not a solicitor, I’m a motor mechanic – I do LPG conversions. I would love to fight it but what do you do? I don’t know what you can do, really.

“I can’t move anywhere, I’m 55 now – this could put me on the scrap heap. I can’t work for anybody, who is going to hire me? I’ve worked for myself all my life.”

A spokesman for the firms said he understood the council would prefer homes to be built on previously developed land – but could not understand why a busy industrial estate would be considered.

He said: “I think it’s fine to look at brownfield sites for development if they are derelict, but this site is fully leased.

“If it goes ahead it will mean 70 businesses trying to find new premises in Rochdale all at the same time.

“That’s going to be impossible – there is nowhere else for us to go in Rochdale.

“I know three quarters of the businesses here will be forced to close. What will happen to the people we employ?”

The businessman also raised doubts over the local infrastructure’s ability to deal with so many new homes.

“The majority of us live round here,” he said.

“It’s just wrong. The way BizSpace have gone about it is wrong.

“They are trying to get people to sign new short-term licences which give us no protection under the Landlords Act. It’s devious.

“At the minute they are flying a kite, but if they get planning consent there will be nothing we can do to stop them.”

A spokesperson for BizSpace confirmed businesses had been made aware that plans were under consideration.

He said: “We have made customers aware of this process and will update them when there is any firm news. For now though, it is business as usual.

“Whatever the outcome, we are committed to supporting our small business customers, treating them fairly and helping them continue to operate and grow their businesses.”