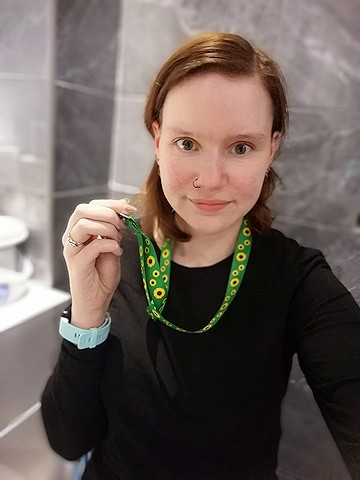 Victoria Whiting, aka 'Aspling', with a sunflower lanyard

A Middleton blogger with autism is campaigning for all railway stations in the UK to back the sunflower lanyard scheme for those with hidden disabilities.

Victoria Whiting, who blogs under the name ‘Aspling, Girl on the Spectrum’, has approached Virgin Trains, Northern, National Rail and Network Rail to adopt the scheme, which was originally introduced by Gatwick Airport three years ago.

The lanyard, which is entirely voluntary for people with hidden disabilities and their families, acts as a discreet sign for staff that additional support or help may be required.

Demand for the initiative has soared since its introduction, with more than 10,000 sunflower lanyards having been collected from Gatwick Airport.

Currently, the lanyard scheme is in place in at a number of railway stations in East London and South Essex.

Victoria, who was diagnosed with autism in early 2017, said: “I personally find train stations to be overwhelming and, having using the sunflower lanyard previously at Manchester Airport, I'd like to see it used in train stations.

“This lanyard serves as an indicator to staff that a person may require some extra support with navigating the environment whilst not openly broadcasting their difficulties to others and could help people to feel more supported, thus minimising the risk of them becoming overloaded and shutting down.

“This initiative could also increase business as people may be more likely to use a service which they feel is knowledgeable and supportive of their needs.”

Victoria, who is studying for a postgraduate degree in psychology, began her blog in 2018 to provide information and support to both parents of children who are autistic and individuals with the condition.

Autism affects how people perceive the world and interact with others; people with autism can have difficulties with every day social communication, social interaction, repetitive behaviours and sensory issues.

Victoria is working on the campaign with a passionate railway enthusiast, William Baron, of Middleton, who also has autism.

When asked what difference she noticed in her treatment with a sunflower lanyard, Victoria said: “I found the staff more welcoming: they treated me just like everyone else, but they showed much more understanding. They helped me round the airport and provided me with quiet spaces when needed.

“The overall difference was just in the attitudes, I felt much more comfortable and able to be independent knowing that there was support available for me. Instead of having eyes glaring, I was met with friendly faces who wanted to help.”

Sainsbury’s supermarket announced a national rollout of the lanyards across all stores in October, following a successful trial, whilst Tesco is running trials at 15 branches in Hertfordshire.

The Trafford Centre has become one of the first shopping centres in the UK to back the scheme to provide more help to visitors with hidden disabilities.

People with invisible conditions can collect and wear a lanyard from the the centre's customer service desks to signal that they may need more support during their visit.

Virgin Trains told Rochdale Online they have an alternative scheme in place, the distinctive ‘Just A Minute’ card (JAM) which can be presented to staff to let them know they have a communication barrier which could be a result of number of factors including autism or a learning difficulty.

The cards can be presented at the holder’s discretion.

Customers apply for a JAM card by filling in a form on their website or by downloading the app and the card is available in either a physical copy or digital format.

Dominic Lund-Conlon, Head of Accessibility and Inclusion at the Rail Delivery Group, which represents all Britain’s train companies, said: “We want to make the railway more accessible to more people, so it’s great to hear that sunflower lanyards are giving customers confidence to travel by train.

“Rail staff are trained to ask ‘How can I help?’ and this scheme, along with the JAM cards, Stickman communication cards and others, helps passengers ask for support in a dignified and discrete way so our staff can help them get to where they need to be.”

Network Rail and Northern did not respond to an invitation to comment.

I have a hidden disability. Where can I pick up a lanyard?

You can pick up a free lanyard to keep where the scheme is in place, or you can purchase your own online.

Lanyards can be purchased from the Hidden Disabilities store: