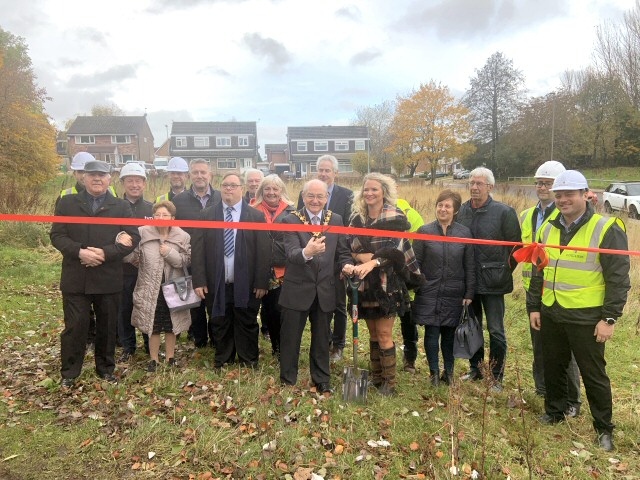 The Mayor of Rochdale, Councillor Billy Sheerin, officially broke ground on a new development of apartments in Heywood on Tuesday 5 November.

The Cherwell Village apartments will comprise 17 self-contained homes for people with learning disabilities, who will be supported by on-site staff.

The £1.8 million project is being funded by local social enterprise PossAbilities CIC and has been helped by a community asset transfer of the land from Rochdale Council.

Rachel Law, Chief Executive of PossAbilities, said: “It’s taken two years of planning to get to this stage, and it’s marvellous to have Mayor Sheerin to dig the first sod. He has been a staunch supporter of ours ever since we formed in 2014.”

Mayor Sheerin said: "PossAbilities has been an amazing success since it began and it is wonderful they achieved an ‘Outstanding’ Ofsted report at their latest inspection.

"It was an absolute thrill for me to do the first dig and officially cut the ribbon."

Each apartment will comprise a living room, kitchen, wet room and bedroom, giving people with learning disabilities the opportunity to have their own home for the first time.

Rachel added: “When the large institutions closed, people with learning disabilities went to live in houses that they shared with several other people. This was a great step forward for the times, but there is no reason why people with a learning disability cannot have their own home just like the rest of us.

“There is a real shortage of this type of accommodation and that’s why we are building Cherwell Village.”

The apartments are scheduled for completion early in 2021 when the first residents will be moving in.