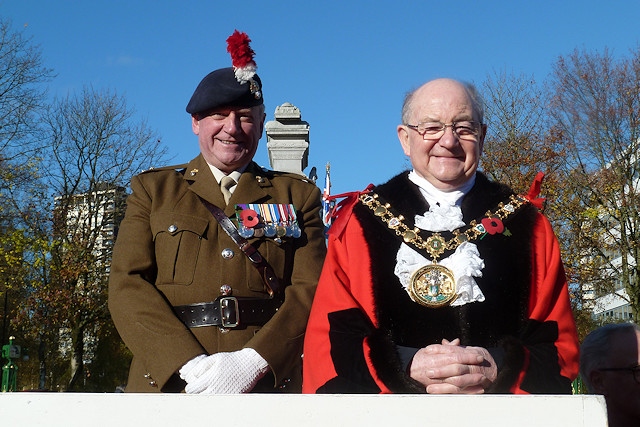 This weekly column from the Mayor of Rochdale, Councillor Billy Sheerin, is about the places he has been and the people he has met during the week commencing Monday 4 November to Sunday 10 November 2019.

I started the week with the Ex-Mayor’s Dinner at Rochdale Town Hall. This is an annual dinner organised by an ex-mayor of Rochdale, who invites other fellow ex-mayors and the current mayor to catch up over a meal and drinks. It was especially nice for me seeing more senior members of the ex-mayors.

Every year, I have produced a village pantomime in Castleton and have always invited the mayor at the time to attend; it was nice to look back at mayors who have attended the pantomimes and catch up with them.

To celebrate the occasion, I was invited to cut the ribbon to officially open the newly refurbished dining room at the home, which is themed as an American diner and was designed and chosen by the service users.

Thames House recently received a ‘Good’ Ofsted report and you could certainly see why as the place was spotless, it really is a credit to the community. I was made to feel very welcome and enjoyed having a chat with the residents, I found it a rather special day.

Thank you to Dawn Moran, Home Manager, for inviting me. I was also pleased that the staff had been involved in the Springhill Hospice Palliative Care Education Passport Programme and all graduated.

I then went across to the Cherwell Centre for the official breaking of the ground of a new development of apartments in Heywood.

The Cherwell Village apartments will comprise of 17 apartments for people with learning disabilities, who will be supported by on-site staff, funded by PossAbilities CIC who are based at Cherwell and help a range of vulnerable people within the community. CEO of PossAbilities, Rachel Law, started this social enterprise which has been an amazing success, achieving an ‘Outstanding’ Ofsted report.

It was an absolute thrill for me to do the first dig and cut the ribbon with Rachel.

Also, on Tuesday (5 November), I went to Castleton War Memorial to see the new flag stones that have been installed thanks to Balfour Beatty, a new sponsor for Rochdale In Bloom. This was perfect timing, just in time for Remembrance Sunday.

Wednesday (6 November) I went on a Manchester Waterways Cruise in aid of the Mayor's Charity Appeal. We left by coach from the town hall then departed from Castlefield, Manchester on a journey to Salford Quays. The boat was called Emmeline Pankhurst and was fully fitted out with all dining facilities and a bar, it was very comfortable. We had a running commentary of all the historic sites that we were passing along the waterways, heading along Manchester Ship Canal to the The Lowry.

Attendees enjoyed a meal and dessert on the way back, as well as a big raffle for the Mayor’s Charity. It was a good fun day out for all, surrounded by a lot of really nice people.

The event was organised by the secretary of Rochdale Heartbeat Sue Ridgard, who is also part of the Mayor’s Charity Committee. All who attended helped raise money for my six chosen charities this year: Springhill Hospice, M6 Theatre, Hydro Pool, Leukaemia UK, Parkinson's UK and Shopmobility, plus other local charities and groups.

I went to Queen Elizabeth Hall on Thursday 7 November with the Mayor of Tameside, the Deputy Mayor of Oldham and her consort, Oldham’s Youth Mayor and the Deputy Lord Lieutenant for Oldham Hulme Grammar School’s annual speech night.

This was a very entertaining night, celebrating the achievements of the students with lots of awards given out. The hall was packed with students, parents, teachers and dignitaries as awards were presented.

St John’s RC Primary School, Rochdale, opened their new fitness gym on Friday (8 November) after figures have shown that more children in primary schools are statistically overweight. I think it is amazing that the school have addressed this issue with a brand-new installation of a gym.

The suite is enclosed so weather won’t affect it during PE, and it had all sorts of apparatus. The children who were using it really enjoyed the opening as they followed a fun fitness video.

Thank you to the headmaster of St John’s, Michael Unsworth, for inviting me. I feel that, and I hope that, other schools will follow suit.

I attended with Councillor Kieran Heakin, cabinet member for children’s services and previous headmaster of St John's, who also applauded the initiative.

I then went to Hamer Primary School as part of their Care Week; this was another terrific initiative by a primary school where children were learning vital first aid skills such as CPR and practicing the recovery position.

The deputy headteacher Tom Nadin welcomed me and I got myself involved, letting the children practice their newly learnt skills on me.

The Rochdale Business Awards 2019 were hosted at Rochdale Town Hall on Friday evening. These awards are a great way of promoting Rochdale.

I applaud all businesses in Rochdale for their endeavours and for bringing employment to the borough and wish them prosperity and all the best for the future. Well done to all the winners, finalists and nominees this year.

I always enjoy events that involve riding on a train.

After that, I came back to Rochdale and toured shops and shopping precincts with Wing Commander David Forbes that had collections of Royal British Legion donation boxes - Morrisons, ASDA, Rochdale Exchange and the Wheatsheaf. I thanked volunteers for their efforts in selling poppies for remembrance.

Sunday, it was all about remembrance. It was a very special and emotional day for me, having lost my grandfather in World War One.

My brother also served in the Lancashire Fusiliers, and my sister was a sister in the Queen Alexandra Royal Nursing Corps, so my family has had contacts with the forces for over a century. It was not difficult to be thinking of them all at such a very special event, and I did so with pride and thanksgiving.

The sun shone on us, the music was excellent, the crowds were amazing, and the parades were outstanding.

Rochdale did us proud in our remembrance of the fallen.

I want to say a huge thank you to everyone who attended the Remembrance Day services, parades and concerts held throughout the borough and to all representatives from the armed forces for attending and making the day even more special.

I attended the remembrance services at Rochdale Cenotaph and later at Wardle War Memorial. Several people continued up to Rochdale cemetery after the service at the cenotaph in Rochdale, where we also laid a wreath.

To finish the week, I attended an event at the town hall for Remembrance Sunday, which split the proceeds between the Mayor’s Charity Appeal and the Poppy Appeal.

'Let's Hear It For The Wee Man' was a wonderful musical concert telling the true story of Northern Ireland's only recipient of the Victoria Cross, James Magennis, with words and music by Jimmy Cricket.

This was a brilliant story of poetry, adventure and bravery and was a great way to end the remembrance commemorations.