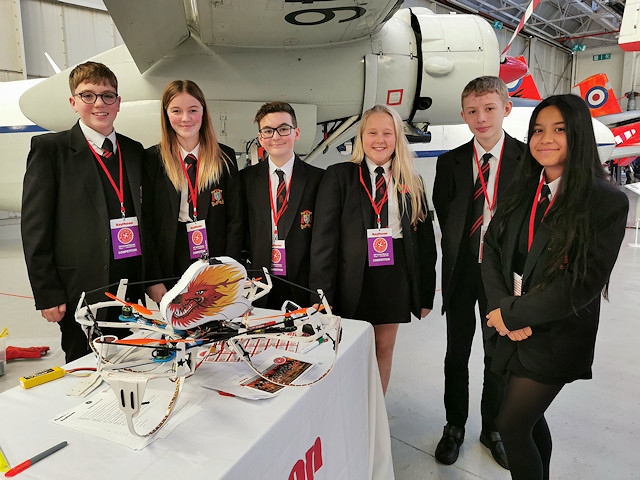 Cardinal Langley students with their quadcopter

The national final saw more than 60 pupils gather at the RAF Cosford Museum, for the UK-wide engineering challenge, where students designed, built and flew their own quadcopters.

Cardinal Langley made it through to the national final after winning the regionals in October.

Teams were judged on the accuracy, agility and creativity of their quadcopter designs, and members also gave a 10-minute presentation to explain the design process and how they managed their project.

However, following a closely fought contest, Kingdown School in Warminster was ultimately crowned winner of the grand finale.

Mr Hogg, the Design & Technology Teacher from Cardinal Langley, was very impressed with his students as they worked really hard, putting in lots of lunchtime and after school hours to design, modify, test and rebuild their drone.

He said: “The students arrived at the competition at RAF Cosford with a drone they had built themselves and hoped it would do well in the competition. They showed great resilience and teamwork ensuring that on the day they had prepared as much as they could.

“Their presentation at the final had humour, facts and engaged with the audience. Unfortunately, the flying proved to be tricky, and although they completed all four obstacle courses, they were not the quickest.

“The students had a very long but rewarding day which they thoroughly enjoyed it and several of the students asked if they could do it again!”

During the course of the challenge, over 200 Raytheon employees volunteered their time as science, technology, engineering and maths (STEM) ambassadors.

They mentored the teams throughout the competition, visiting schools, hosting workshops and guiding pupils on how to improve the aerodynamics and control of the quadcopters.