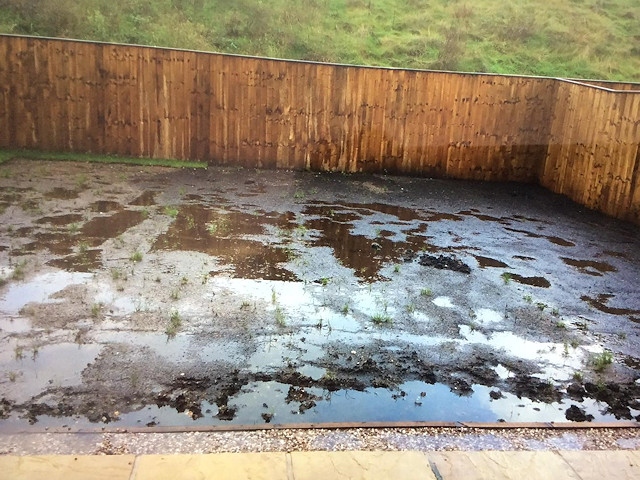 One of the Greenbooth Village gardens after rainfall in October

Approximately half of the 40 homes in the Russell Homes development have allegedly been affected by poor drainage in recent months, causing their gardens to flood.

Norden’s local councillor James Gartside has said the state of the gardens is 'not satisfactory at all'.

Councillor Gartside says some residents contacted him directly approximately a month ago, and that he has spoken to the council about the issue: “At the moment, the council say it’s a private matter. It’s between the developers and the householders.

“I’ve mentioned this to the householders but they’re unhappy about it.”

He added: “Remarkably the houses haven’t flooded but it will almost certainly reach inside the homes. It’s intolerable. I feel for them really; it’s an awful situation to be in.”

The Norden development has seen residents purchasing ‘forever homes’ of up to £600k from the award-nominated Russell Homes, which was shortlisted for this year’s Rochdale Borough Design Awards for the Greenbooth Village estate.

One resident of Greenbooth Village said it was 'ludicrous' that Russell Homes were nominated for the award considering the state of the site.

Describing the situation, they said: “There’s some gardens where you just completely sink.

“Some residents raised concerns over a year ago.

“People are buying their dream homes here and they should have a usable garden.”

However, Russell Homes says the complaints are in relation to this summer’s heavy rainfall, with the developer taking steps to assist with reports of flooding and excess surface water.

In late July, more than a month’s rain fell in just 48 hours in the Rochdale borough, the highest level of weekend rainfall in the country at the time.

The developer added it also cleared drains beyond the development boundary and installed an additional drainage channel and that because of these measures, ‘no repeat situations’ have occurred'.

A spokesperson said: “During the unprecedented rainfall during the summer there were some instances of garden flooding and excess surface water, and we took steps at the time to assist with the situation.

“This involved clearing drains beyond the boundary of the development and installing an additional drainage channel to divert any similarly high rainfall away from the affected gardens in the future, and there has not been a repeat of this situation despite continued heavy rain.

“We are aware of some residents' current concerns and are therefore monitoring the situation very closely. As far as we are aware, a number of gardens are reported to be saturated.

“Unfortunately, this is quite a common occurrence at this time of year and in particular considering the record rainfall over recent months.

“To put it into context, 2019 was one of the wettest summers on record, and since then each month has continued to exceed average rainfall. For example, in July the area got 1.5 times the average months' worth of rain in just two days. In September it rained on 22 days, where it would usually be around 12.

“Russell Homes is a responsible house builder and all of our developments comply with the relevant regulations with regard to drainage.

“Fundamentally the site drainage at this development meets with current standards and is working correctly and the gardens should drain as expected in normal conditions.”

Residents have since received a letter from Russell Homes stating there will be no further action.