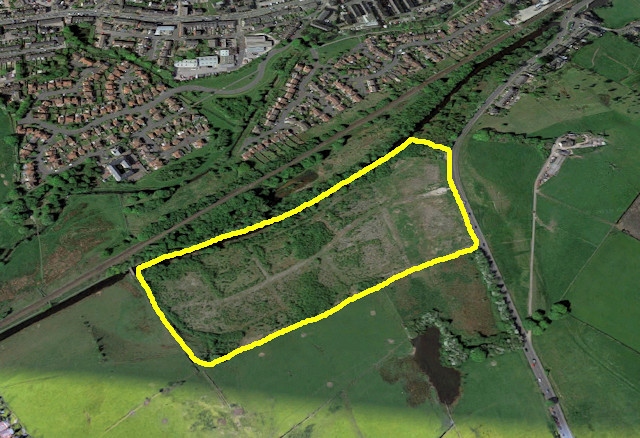 The government is reviving controversial plans to build new homes on the Akzo Nobel site, near Hollingworth Lake.

Homes England stepped in to buy the former chemical works site two years ago after Countryside Properties failed to begin work on a 174-home estate.

Plans for the homes were given permission in 2015 following several years of wrangling – including a council ‘review’ after new information came to light about old mine seams.

Homes England acquired the site – which was contaminated by asbestos and other harmful chemicals – for £10m in order to clean it up for future developers.

And it has now confirmed it will carry out new coal mining, traffic and ecology surveys as part of a ‘technical pack’ for firms who may want to bid for the site.

Once a developer has been chosen, they are expected to lodge a new planning application with Rochdale council in spring 2021.

Proposals to develop the site have previously met with fierce local opposition, due to fears over flood risks, contaminated land, increased traffic and unmapped mine works.

Homes England is understood to be discussing the scheme with Littleborough Civic Trust, to ‘ensure community engagement during the planning and delivery process’.

Civic Trust committee member Barry Cropper led the campaign against previous applications and forced a review in 2012 after providing new information about coal seams beneath the site.

While the trust welcomes the fact Homes England has ‘taken heed’ of its concerns and is ‘beginning the process again in its entirety’ – Mr Cropper still has misgivings over the development of the site.

His main concern is that the Coal Authority – which as a consultee advised the council the land was safe for redevelopment – does not have ‘official plans’ for historic works at the site, and there are no details about the clay mining the land was bought for in 1874.

“The only way to prove what is or isn’t under Akzo is for someone to do a lot of drilling and that costs a lot of money,” he said.

He is also angry about a response from the Coal Authority to the council which does not make reference to the ‘Upper Mountain’ seam under the Akzo Nobel site.

An earlier draft seen to Mr Cropper – states the seam is ‘not expected to be present’ in the area – but handwritten notes alongside it read ‘Remove… it is likely Upper Mountain is there but either too thin to work or has been worked but unrecorded’.

The document has been seen by the Local Democracy Reporting Service.

Mr Cropper said: “All I have said is prove it is safe. Without proving it, you can’t just say ‘according to our information’."

However, the Coal Authority says its advice is based on the coal mining legacy information it holds as well as the findings of its geographic mapping system which identifies where ‘unrecorded probable shallow coal workings are likely to have taken place’.

The Coal Authority also says the lack of reference to the upper mountain seam in a letter to the council was amended ‘in light of technical advice received from our Mining Information Team, who are specialists in understanding geological data’.

As spokesman said: “This was corrected retrospectively and is not the authority redacting any data. We do not have any records or evidence of workings in the Upper Mountain Seam beneath this site. The seam thickness is likely to suggest it would have been uneconomical to have been mined. However, the un-worked seam is highly likely to be present.”

The Akzo Nobel site is next to land earmarked for 300 homes under the latest draft of the Greater Manchester Spatial Framework.

The impact of future development on traffic congestion, flooding and local services is also a huge concern among local residents.

Ian Jackson, chairman of Littleborough Civic Trust says the group recognises that the Akzo Nobel site is a brownfield site which ‘does not impinge on any green belt land’.

He added: “However, that does not detract from the fact that Littleborough’s infrastructure remains totally inadequate in many aspects and thus, if residential development is the focus then our concerns are valid.”

A Homes England spokesperson said: “The recent technical work has involved a full audit of these reports so that we can provide purchasers with clarity regarding the environmental status of the site.

“We are updating the species surveys as these reports cannot be relied on for longer than three years so wish to ensure our information is up to date.

“We do not have concerns over old mineshafts and mine works at the site but wish to offer reassurance to both the local community and developers on the accuracy of the information.”

The Akzo Nobel factory, which processed chemicals for use in fabric softeners, closed in 2004 with the loss of 70 jobs and was demolished in 2008.

In 2005 Bellway Homes scrapped plans to build 280 homes on the site amid fears over contamination and later plans by the Woodford Group to construct 165 homes, a hotel, pub and showground were also dropped.