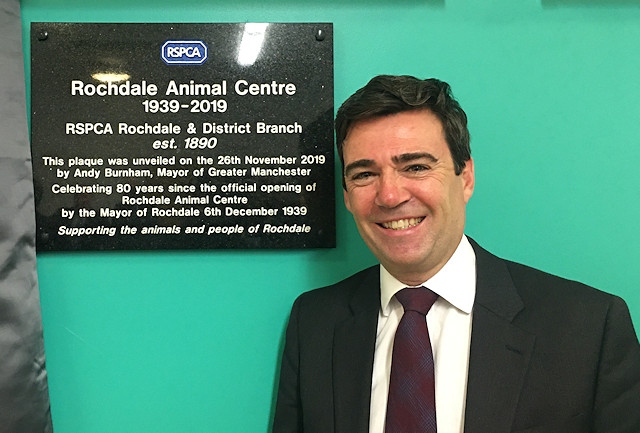 Mayor of Greater Manchester, Andy Burnham unveils a plaque at the RSPCA centre on Redcross Street

The Rochdale & District branch of the RSPCA celebrated 80 years of operation from the Redcross Street Animal Centre with a special gathering on Tuesday 26 November.

Distinguished guests gathered as the Lord Lieutenant, Warren Smith JP, unveiled a framed letter from Her Majesty the Queen, congratulating the local branch on their hard work over the last 80 years, whilst Greater Manchester Metro Mayor Andy Burnham unveiled a special plaque.

Speeches were also given by Jackie Poke, chair of the Rochdale and district branch, and David Canavan, the branch secretary.

Mr Canavan gave an overview of the Rochdale branch’s extensive 130-year history, which was originally established in 1890, operating across a number of local premises, before moving to the former Woodman Hotel on Redcross Street in 1939.

He said: “This branch opened on this site in 1939 and we’ve been here continuously for 80 years since then.

“We have enjoyed the support throughout our time in Rochdale; people have been absolutely fantastic. It's amazing how many people love animals and it's amazing what service these animals can perform.”

The Rochdale & District branch of the RSPCA opened in 1939 as a joint venture with the former National Veterinary Medicine Association (known today as the British Veterinary Association).

The building was demolished in the 1960s, before being rebuilt as the centre which still stands today. In 2004, the St John Ambulance gave some adjacent land to the local branch, allowing the construction of a state-of-the-art cattery – the largest in the north west.

A plot of land was donated to the cause two years later by the local authority, allowing the construction of a specialised area to exercise dogs.

Mr Canavan continued: “These animals are taken from cruel situations, often abused or abandoned, and they’re given the chance of a long and happy loving home by the staff here and our volunteers.”

In 2016, the centre began to take in wildlife after the closure of the Three Owls bird sanctuary in Norden and a local wildlife and hedgehog hospital.

The local branch receives both pets and wildlife acquired by the inspectors from various places, taking in around 1,400 animals in the last twelve months, receiving much-needed TLC before being rehomed or released back into the wild.

In the last year, the Rochdale branch has taken in around 700 wild animals, as many require looking after on a long-term basis before release – without becoming domesticated to ensure their survival.

Though most wildlife is taken to the RSPCA’s centre at Stapeley Grange in Nantwich, many wild animals, such as swans, foxes, badgers, hedgehogs, heron and pigeons, are brought into Rochdale from across the north.