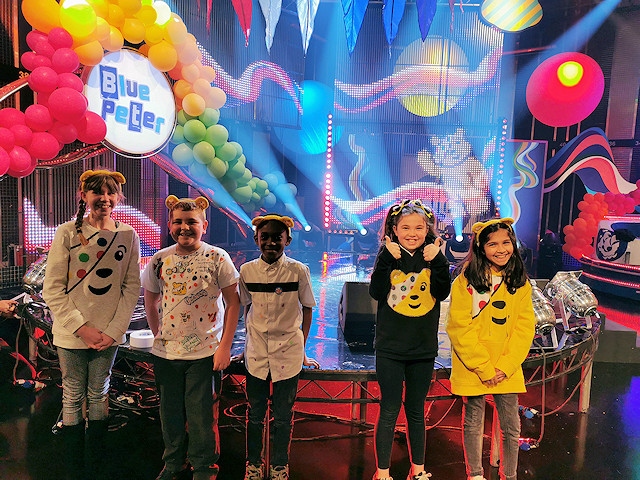 Pupils from Little Heaton C of E Primary School, Middleton, on the set of Blue Peter

As a reward for their hard work, 50 pupils from the school, along with staff and governors, were invited along to Media City for the chance to experience live TV. The shows were a spectacular celebration of children and young people who’ve worked hard to fundraise for the BBC’s flagship charity, Children in Need.

The pupils met Pudsey and Blush and danced the afternoon away to HRVY and The Wonderland as well as taking part in the live bring and by sale.

They also got the chance to speak to Great British Bake Off finalist Steph Blackwell about their own baking talents for the biscuit and cake sales they’d done at school to raise to money, and their biscuits went down a treat with resident Blue Peter dog Henry.

Year 5 and 6 pupils, Charlotte, James, Daniel, Charlii and Layal from the school’s Pupil Leadership Team were interviewed live where they told Newsround presenter Martin Dougan and Blue Peter presenter Richie Driss about all the fundraising activities they’ve been doing throughout the year.

Head Girl Layla said: “We believe in the Children in Need motto; 'together we can change lives’. We believe in showing compassion to others in lots of fun and kind ways.”

The school is passionate about raising money for good causes and is particularly fond of the Children in Need charity as their vision links to the schools values of love, respect, aspirations, compassion and team work.

Head teacher Jo Hulme said: “The whole school is incredibly proud of all the children and families for their fundraising efforts for Children in Need. It was such a special occasion for the pupils; they really deserve that special experience for all the hard work they’ve put into fundraising. I’m proud to see Blue Peter and Newsround commend our pupils for their enthusiasm, politeness, compassion and respect for others; real qualities our school encourages in our young people.”

The final icing on the cake of the event was that each pupil received one of the highly coveted Blue Peter badges for their advocate work and participation in the Blue Peter show.

Head boy James in year 6 said: “We were thrilled to be asked by Blue Peter to share the ways we have helped to change lives for children in Middleton and across the UK through our Children in Need fundraising. It was so exciting being live on TV in the Blue Peter studios telling the presenters about all the fun we had, especially making cakes and the duck race.”

You can still donate to Children in Need at bbcchildreninneed.co.uk and the episode of Blue Peter is available on the BBC iPlayer.