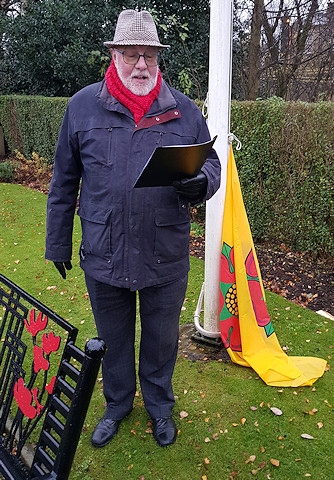 To celebrate Lancashire Day, the Flag of Lancashire, displaying the Red Rose of Lancaster, was raised in Littleborough at 8.30am on Wednesday (27 November).

Former Man of Rochdale John Kay, a member of the Littleborough Events and Activities Forum (LEAF), raised the flag and read out the Lancashire proclamation.

Afterwards he said: “I have now done this for several years as a member of LEAF.”

A flag raising is held ever year on 27 November to commemorate the day in 1295 when Lancashire first sent representatives to Parliament. Lancashire Day was first held in 1996.

This year in Littleborough it was witnessed by a small gathering of local councillors.

On 27 November 1295 the first elected representatives from Lancashire were called to Westminster by King Edward I to attend what later became known as 'The Model Parliament'.

The Lancashire Day proclamation is read out by town criers throughout the county on 27 November:

To the people of the city and county palatine of Lancaster

Know ye that this day, November 27 in the year of our Lord Two Thousand and Nineteen, the 69th year of the reign of Her Majesty Queen Elizabeth II, Duke of Lancaster, is Lancashire Day.

Know ye also, and rejoice, that by virtue of Her Majesty's County Palatine of Lancaster, the citizens of the Hundreds of Lonsdale, North and South of the Sands, Amounderness, Leyland, Blackburn, Salford and West Derby are forever entitled to style themselves Lancastrians.

Throughout the County Palatine, from the Furness Fells to the River Mersey, from the Irish Sea to the Pennines, this day shall ever mark the peoples' pleasure in that excellent distinction - true Lancastrians, proud of the Red Rose and loyal to our Sovereign Duke.

God bless Lancashire and God save the Queen, Duke of Lancaster.