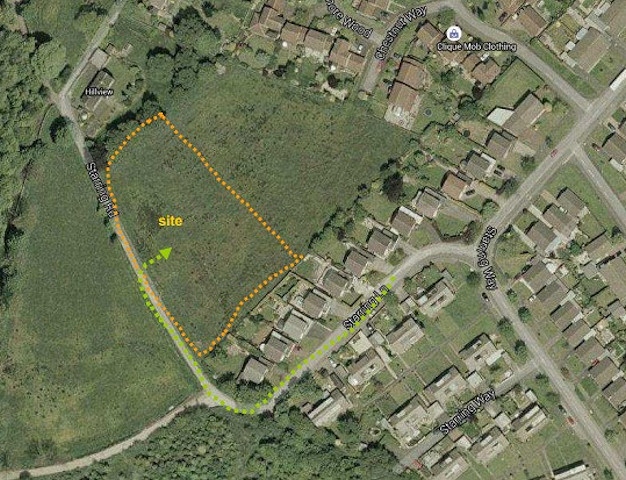 A builder’s revised plans for seven new homes have been given the go-ahead – but not before the firm was hauled before a committee to explain itself.

The properties, off Starring Lane, in Littleborough, were built too high by Hoyle Developments due to unforeseen conditions at the site, meaning the floor – or ‘slab’ levels – had to be raised.

This sparked fury among Starring Lane residents, who complained of being overlooked by the imposing houses, as well as their homes now being more prone to flooding.

There were also further complaints about drainage and a boundary wall deviating from the original scheme.

Hoyle Developments proposed to lower the heights of roofs to compensate – and the plans have been further amended so the two tallest homes would be lowered by a further six inches.

However, when the scheme went before Rochdale council’s planning committee in October, they deferred their decision – demanding that builder appeared before them to explain what had gone wrong.

The discovery of an unregistered water pipe under the site led to the site being developed in a way that strayed from the original planning permission.

Under a grilling from councillors at this month’s meeting, agent Graham Healey admitted it had been ‘incompetence’ not to submit new plans once this came to light.

Challenged by Councillor John Taylor on whether it was a case of ‘sheer disregard of the planning application or incompetence’, he said: “Given the choice of the two it was incompetence – we should really have consulted with the planners, but we didn’t.

“Once plot four was in, it set a pattern for the others.”

“Five of the seven (homes) are actually constructed, we are doing our best with the ones that aren’t.

“With all the houses now, the ridge heights are all less than they would have been had we adhered exactly to the first application that was approved.

“We can’t do anything with the slabs on the plots other than four and five.”

Mr Healey told the committee that United Utilities had accepted responsibility for the water pipe – which supplies homes to the north of the site – and were looking into how it would be relocated.

However, no formal agreement is yet in place.

Councillor Peter Winkler said: “If there’s been incompetence these people have got no reason to have any grounds to trust this is going to happen.

“We need agreement with United Utilities as a third party which we as a planning committee can’t condition.

“Can we not therefore defer this whole decision until we have it in writing – from the applicant and United Utilities – so that residents have something in writing that they can trust in, that isn’t going to be incompetent.”

Councillor Winkler put forward a motion to defer the decision until there was evidence that United Utilities would relocate the water pipe.

This was seconded by Councillor John Taylor, who said: “We are dealing with an incompetent builder here and it’s important the residents and the wider public have confidence in the planning process.”

While the motion was for deferral – rather than refusal – committee chair Councillor Shakil Ahmed sparked uproar when he reminded councillors planning appeals could cost the authority ‘a lot of money’.

Members of the public shouted ‘shocking’ and ‘you ought to be ashamed of yourself’, but Councillor Irene Davidson spoke to condemn one comment which suggested ‘brown envelopes’ were at play.

The motion was defeated, and Councillor Faisal Rana then moved for the application to be approved in line with the planning officer’s recommendation.

Paul Moore, head of planning, reassured the committee the council had a range of enforcement powers it could call on should it need to before this was passed by members.

Speaking after the meeting, Steve Hoyle, owner of Hoyle Developments, said Mr Healey’s comments had been misconstrued in the meeting.

“He didn’t mean we were incompetent; I have built over 100 houses in the borough and these are the best I have ever built,” he said.

“In hindsight it was incompetent not to tell them that the slab heights in the initial planning approval were not high enough.

“The criteria on any building development is ridge (roof) heights, not slab height, we have altered ridge heights, so they are within the original planning.”

While he believes some objectors simply want to stop development at the site, he added: “There are a couple of complaints I can understand, they are big, imposing six-bedroom houses, but that should have been addressed before it got planning permission.

The meeting was held at Rochdale council’s Number One Riverside offices on Wednesday, 27 November.