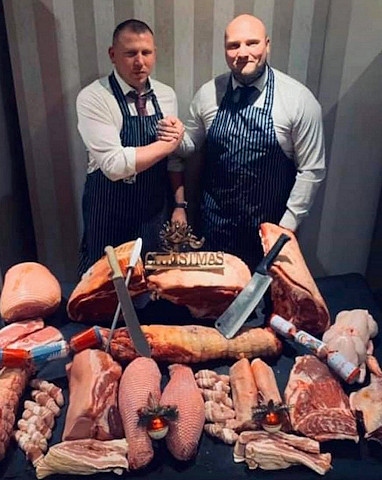 Darren Rushton and Stephen Bamford, the owners of Cryers Butchers, made the donation after seeing the RCT’s Christmas Hamper Appeal

Darren Rushton and Stephen Bamford, the owners of Cryers Butchers made the donation on Thursday (28 November) after seeing the RCT’s Christmas Hamper Appeal over the past few weeks.

The hampers were offered to the organisation’s most vulnerable families.

Holly Stevenson, RCT Project Manager, said: “The hampers will go a long way to helping those in need. They have no idea how happy they have made our lovely families; we have nearly had tears of joy. Christmas can be a hard time of year and gestures like this make it that little bit easier.

“RCT want to say a big thank you to Cryers.”

Darren, from Cryers, said that they donate hampers to families and homeless people every year.

He said: “We give out donations to families every year. I get messages from different people that tell me which people are in need and then I contact them directly.

Established in 1997, the Rochdale Connections Trust is an independent voluntary organisation which provides an array of helpful services to young people, adults and families in need.

The organisation works with individuals who are socially isolated or have complex needs.

However, they have remained highly committed to their original target which is the youth support programme.