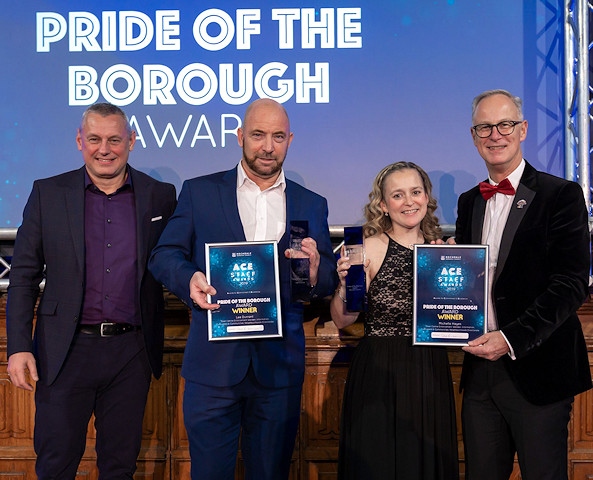 Outstanding achievements by Rochdale Borough Council employees were recognised during The Ace Staff Awards held at the town hall on Thursday 21 November.

Eight awards were presented to individuals and teams after more than 340 staff were nominated by local residents and colleagues for excellence, commitment and hard work.

Renowned for their dedicated work, in July they stepped in to help a resident suffering a stroke outside the town hall. Their fast action and thoughtfulness was praised by the resident’s daughter who put forward the nomination saying “they are a credit to the council, and I dread to think what would have happened to my dad without their intervention.”

Employee of the year sponsored by Cooney Civil Engineering was awarded to Sally Cook, who manages front line adult care services in the borough. Supportive and inspiring, she also volunteers for a range of pioneering projects and was praised for her worth ethic and leadership.

The Community Action Award sponsored by Civica was won by John Doyle. He works alone litter picking, emptying bins and keeping Wardleworth clean and tidy which is really appreciated and admired by the local community. His proactive work is an inspiration and in addition to his council duties he keeps an eye out for people and is an important presence around the area.

Olivia Ogden, one of the council’s stars of the future described as a ‘committed and positive role model’ won young employee of the year, sponsored by Keepmoat Homes. The business support assistant in Adult Care is the ‘go-to person’ that new apprentices now ask for support.

Learner of the year, sponsored by Rochdale Training, was Catherine Barlow. Working in pest control for many years she has driven the service forward with a vast reserve of knowledge to help residents.  Well qualified and always keeping up to date with the latest information she was described as someone who will always go an extra ten miles to resolve a situation.

The school improvement team won the inspiring change award sponsored by Agilisys for supporting the development of children’s wellbeing. Successfully working with children and families from a range of disadvantaged backgrounds they have pioneered a range of innovative projects.

The Talk English Team sponsored by Countryside Properties was named team of the year. Delivering English as a second language classes for over five years, in 2018 they delivered classes to 529 learners as well as recruiting and supporting 74 volunteers. They were praised for putting people at the centre of everything they do, helping residents access employment and other vital services.

The outstanding contribution award sponsored by YPO was won by head of revenues and benefits Keith Mackenzie, in recognition of his ‘exceptional service to the authority over the last 30 years’.

The evening was opened by the Mayor of Rochdale, Councillor Billy Sheerin, who said councillors are grateful for the hard work and dedication of staff: “These awards remind us about the huge amount of work done and how we make a difference to people’s lives. I’m very pleased that so many people, including lots of residents, took the time to make a nomination. Congratulations to all our finalists and winners.”

Chief executive Steve Rumbelow added: “Whether it’s filling potholes, helping children and families, finding people jobs, keeping our parks pristine, emptying bins, looking after vulnerable adults or one of the hundreds of other services we provide, our staff help make the borough a better place. The Ace Awards recognise the very best and I am very proud.”

During the evening there was a musical performance from Rochdale singer-songwriter Katie O’Malley accompanied by Tobi Afolabi, as well as mesmerising magic from Barrington Powell.