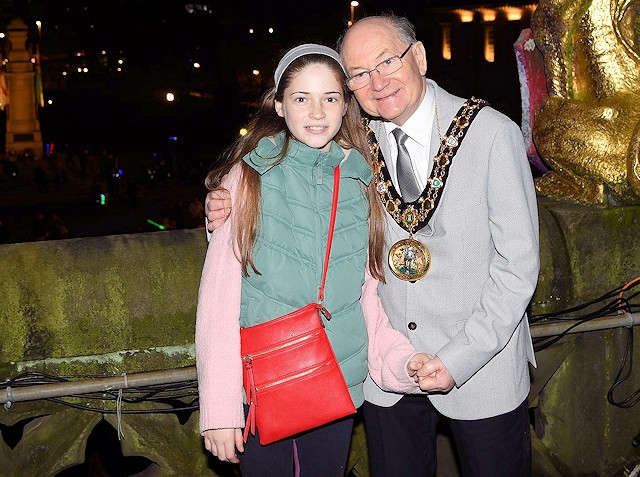 This weekly column from the Mayor of Rochdale, Councillor Billy Sheerin, is about the places he has been and the people he has met during the week commencing Monday 18 November to Sunday 24 November 2019.

My first event of the week was the raising of the rainbow flag at Rochdale Town Hall to welcome the start of Rochdale in Rainbows. Taking place between Saturday 16 and Saturday 30 November, this was Rochdale’s first ever Pride festival, celebrating the diversity of our township whilst raising awareness of LGBT+ services.

After the flag raising, attendees had the opportunity to drop into Number One Riverside to talk to stallholders who provide services across the borough, informing the public of LGBT+ issues, health checks, hate crime reporting and schemes like Pride in Practice, run by the LGBT Foundation.

More information about Rochdale in Rainbows can be found here:

Later on Monday (18 November) I was invited to Apna Ghar at KYP for an International Men’s Day event organised by Rochdale and District Mind.

When it comes to looking for treatment for being diagnosed with problems, men tend to shy away from it, and this event was to try and make men aware of the issues that come around usually in later life which could be life threatening if not treated, for example, prostate cancer. There are more men in America that die with prostate cancer then they do with heart disease, which was an eye-opening fact for me. It is the silent killer in men.

This was a really good event as it made men aware of treatment available and how they should be being checked out and monitoring their health, both physically and mentally.

I was delighted to attend and address issues; having been with the council’s adult and social care section, I know how important men’s health is.

This event at Number One Riverside was titled ‘Marketplace’ and was open to the public to explore all sorts of information stands, from benefits right through to housing and domestic violence. I was impressed with the stalls there and hope the week can be held again next year.

I learnt that becoming a casualty in a road traffic collision continues to be one of the biggest risks for young people, with 17 - 25 year olds being disproportionately represented in the casualty statistics of those killed or seriously injured on our roads. Between January 2008 and December 2017 in Greater Manchester alone, 139 people died in crashes involving a young driver, and a further 1,462 people were seriously injured, but the Safe Drive Stay Alive scheme aims to change this.

A series of short emotive films were presented, and speakers were invited to talk from each of the emergency services to get their point across to the school and college groups present. It also included presentations from members of families whose lives have been affected and sometimes destroyed by a serious road traffic collision.

It was quite harrowing for me to find out how many people, especially young people, are involved in road incidents caused by speeding.

Rochdale has had 625 students attend the Safe Drive Stay Alive project. I personally feel that it should be mandatory for all young drivers to attend this event at least once.

It was my absolute pleasure to go and cut the cake. I am very proud to support and have Rochdale Connections Trust as one of my mayor’s charities this year. 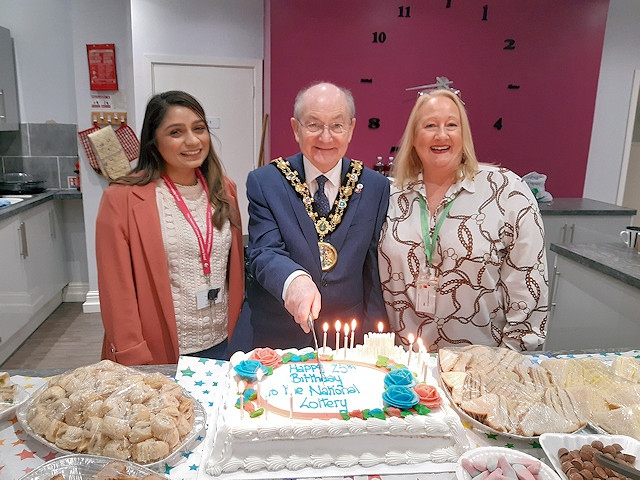 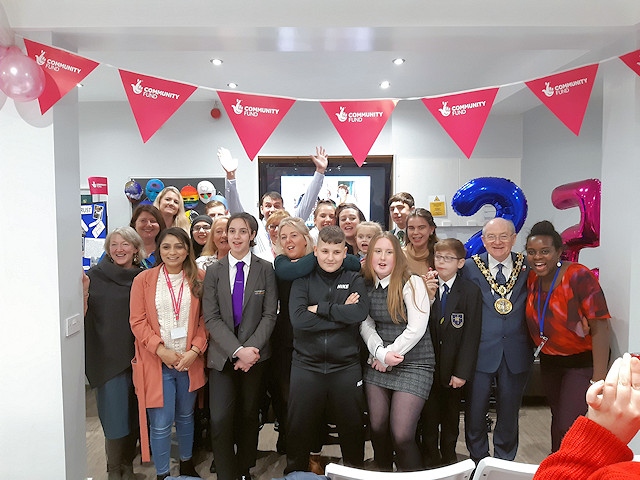 Wednesday 20 November welcomed The Strand Community Café launch in Kirkholt. This is a wonderful project by Crossroads Together, network partner of Carers Trust sponsored by Rochdale Boroughwide Housing, who share a vision to provide high quality services for carers and people with care needs.

Crossroads wanted to develop and bring a live café to the Strand where people can pop in, have a value for money meal and meet other residents. It really will have a knock-on effect, also combatting loneliness in modern and new surroundings.

I really want this to succeed; it has my full support and I am thankful to have been invited to officially cut the ribbon.

Wednesday evening, In Bloom had their annual celebration at Rochdale Town Hall. This was a boroughwide celebration of the massive amount of success that all townships have experienced with their endeavours in the North West in Bloom competitions this year, including In Your Neighbourhood entries. I cannot see the amount of gold awards won this year ever being equalled, but then again, there is next year…

For Rochdale, Heywood, Pennines and Middleton (Middleton after only three years of entering) to gain gold awards was seriously outstanding.

Thursday morning, I presented a cheque of £450 to the Veterans Breakfast Club. This was a surprise presentation by me, collected by Wing Commander David Forbes on behalf of the club. The cheque was from the money raised on Remembrance Sunday at the ‘Let’s Hear it for the Wee Man’ event, which was split 50/50 between the Mayor’s Charity Appeal and the Breakfast Club.

Thursday was National Carers Rights Day and we have thousands of fantastic carers across the borough, doing a brilliant job supporting and caring for their loved ones. Organised by Encompass, an event was hosted at Rochdale Football Club, showcasing all the help, information and advice that is available for carers throughout the year.

This was an extremely well attended event which really pleased me; people were there looking for help and all the help for carers was available at their fingertips.

The Carers Choir were also in attendance and I fulfilled a lifetime ambition of not being a carer, but being a supporter and singing with the choir. This was a really good event in The Ratcliffe Suite.

I then presented awards at St Andrew's Community Church (at the side of Rochdale Leisure Centre) as part of Adult Safeguarding Week to those people who have gone above and beyond their call of duty in adult care.

Thursday (21 November) evening, it was the annual ACE Awards at Rochdale Town Hall. A lot of council employees go out of their way to accomplish more than what is in their job description and these awards are about showing appreciation and acknowledging those who do.

I was involved in one award - the Outstanding Person of the Year award won by Keith Mackenzie, head of revenues and benefits at the council. Keith has been with the council for 30 years and is highly respected across the council and in the community.

Friday 22 November was one of those special days where you go from one extreme to the other. I started at the Man of Rochdale luncheon with notable men of the borough.

Raising funds for the local hospice, which is one of my chosen charities, a sold out room full of men celebrated the achievements of one another, and we had an inspiring speech from ex-footballer Bruce Grobbelaar. Entertaining Mr Grobbelaar in the Mayor’s Parlour was an amazing privilege for me as he is a football legend. We swapped a lot of stories and become good friends, and that is what the love of football is all about.

I was delighted to attend the luncheon as the Mayor this year, sitting on the top table, and was honoured to start the day off by saying grace.

My wife and I then ventured to to St John’s Church, Thornham for a school Christmas concert.

ISingPop is a primary school music project where schools and churches are brought together through music. When you apply, your school gets the chance to record your very own album and perform a live concert and in this case, it was in St John’s Church, Thornham.

What a wonderful experience it was. All the children were wonderful and their presentation was excellent as they performed over an hour.

Saturday, we had a flag raising at Rochdale Town Hall as Rochdale's Ukrainian community commemorated the 86th anniversary of the Holodomor genocide. A religious memorial service led by Reverend Benjamin Lysykanych (Ukrainian Catholic Church) and Reverend Mark Coleman (Church of England) was held, followed by the laying of wreaths by myself and others at Rochdale Memorial Gardens.

Heywood Christmas lights switch on was hosted on Saturday evening and it was excellent, organised by, I believe, volunteers. There was a parade featuring winter wonderland themed characters such as Santa and the characters from Frozen, as well as people dressed as characters from the Nativity. It was really impressive.

After the lights were switched on, we enjoyed a firework display. Congratulations to Heywood on a magnificent event.

To finish the week, on Sunday (24 November), myself and the mayoress were invited to Springhill Hospice's Christmas Fair, which was held at a new bigger venue this year at Kingsway School.

I cut the ribbon to start the event before going into Kingsway Sports Hall, which is a vast space enabling people to walk freely around all the stalls. It is a great new venue for the hospice and I hope it will continue in the future.

As it is one of my Mayor's chosen charities I spent quite a bit of money there!