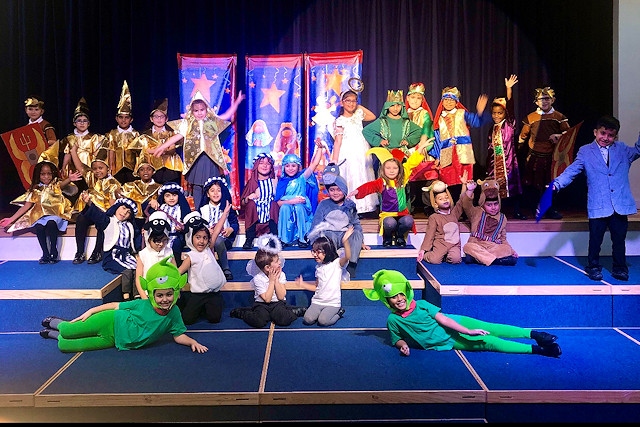 A school in Rochdale could see its Christmas play taken from the school hall to millions of TV screens across the UK after being named as a national finalist in Virgin Media’s Christmas Stars competition.

St Peter’s Church of England Primary School entered its festive nativity into the competition to find the UK’s best primary school play. The school now has the chance to have its play professionally filmed and televised to four million Virgin TV customers in the days leading up to Christmas.

As part of the prize, the winners will work with TV presenter, Stephen Mulhern, who will join the school’s cast playing the role of narrator for a one-off performance.

The school entered a Christmas play called “I’m Gonna Shine” from Out of the Ark. The classic nativity follows Gloria, the brightest star of all, on a magical journey to Bethlehem to see the new baby King, Jesus. Gloria must guide the special guests, including the shepherds and their flocks to Bethlehem before the angry King Herod finds the new born king.

In its entry, St Peter’s Church of England Primary School said they deserved to win because: “At St Peter's, Christmas is a time of sparkles, laughter and a whole lot of singing! Our Christmas plays are fabulously legendary; everyone wants to be part of the action.

“Our top of the range stage, lighting and curtains help us create an exciting and dramatic performance – good enough to rival any West End production! Due to our overexcited staff, costumes can range from donkeys in tutus to one eyed green aliens, and usually include lots of fun face painting.

“The Christmas show is a special time at St Peter's and allows us to show off our diverse community with parents and families coming together to celebrate and enjoy this happy time of year.”

Headteacher, Aelred Whelan, was delighted with the news: “We are so excited to have got this far in the competition; the children and staff have all got their fingers crossed and are hoping to be chosen as the winners!

“The staff and children love preparing and performing our Christmas Nativity plays and each year they seem to get bigger and better. To have our Nativity shown on Virgin media would be the icing on the cake this Christmas!”

As well as being shortlisted to have its Christmas play televised on Virgin TV, St Peter’s Church of England primary school is also guaranteed to win a prize.

The winners of the competition will unwrap £5,000 and receive unforgettable experiences thanks to Andrew Lloyd Webber’s hit West End show, School of Rock the Musical.

A class from the school will be invited to the show’s Gillian Lynne Theatre in London for an electric, rip-roaring performance masterclass from the cast. Afterwards, the children will also be treated to tickets to watch the blockbuster show and see the talented cast in action.

To keep the Christmas spirit going, School of Rock the Musical will generously give the winning school 10 ukuleles so they can strum their way into 2020.

And, as it’ll be the season of goodwill, there are plenty of other prizes. The runner up school will win £1,000 plus 15 ukuleles, while 22 regional finalists will win £100 and two ukuleles each.

“Its production has the perfect ingredients for a feel-good festive play which could be enjoyed by millions of Virgin TV customers this Christmas.”

A panel of judges including Stephen Mulhern and representatives from Virgin Media and School of the Rock the Musical, will preside over the shortlist and select the winner, runner up and 22 regional finalists.

Virgin Media will then film the school’s production and make it available, on-demand, to millions of Virgin TV customers this Christmas.