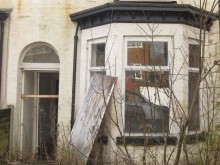 The increased empty property premium is expected to generate an extra £125,000

Owners of homes left empty for longer than five years are to see their council tax bills treble from next spring.

Rochdale council bosses have voted to take full advantage of new government rules allowing local authorities to impose a 200% premium on the properties.

The move is intended to pressure owners to sell-up or rent the dwellings – which often become eyesores – bringing much needed homes back into use.

It is also expected to raise an additional £125,000 in council tax income during the 2020/21 financial year

It comes after council tax bills were doubled back in April for homes left empty for longer than two years.

Of the 238 properties currently subject to the 100% premium, some 61 have been empty for longer than five years and a further 34 in excess of 10 years – suggesting further action was needed.

Council leader Allen Brett told a cabinet meeting he was completely behind the trebling of council tax for long-term empty properties.

A report to cabinet says the advantages of bringing more properties back into use include improving housing conditions and reducing anti-social behaviour that empty homes can attract.

Councillor Brett said the move would improve the quality of life for those ‘unfortunate enough to live next door to somebody who is neglecting their property’, and he told how he had happened upon a house in a terrible condition while recently out canvassing.

“I’ve seen some bad ones, but I have never seen one as bad as that – why anybody would leave a property empty for this length of time, I have no idea,” he said.

He admitted he had come under pressure from residents to do more to address the issue but said ‘human rights’ gave people the right to neglect their properties, making it difficult to take effective action.

From April 2021, the government is also increasing the maximum empty property premium charge to 300% for homes that have been empty in excess of 10 years.

He said: “It is simply wrong that, while there are 200,000 long-term empty properties across the country, thousands of families are desperate for a secure place to call home.”

“This new power will equip councils with the tools they need to encourage owners of long-term empty properties to bring them back into use – and at the same time tackle the harmful effect they have on communities through squatting, vandalism and anti-social behaviour.”

The cabinet meeting was held at Rochdale Town Hall on Monday 2 December.