You are Here: Home » News » News Headlines » Hundreds of pounds worth of meat stolen from Cryers Butchers - but the owners have offered the thieves help 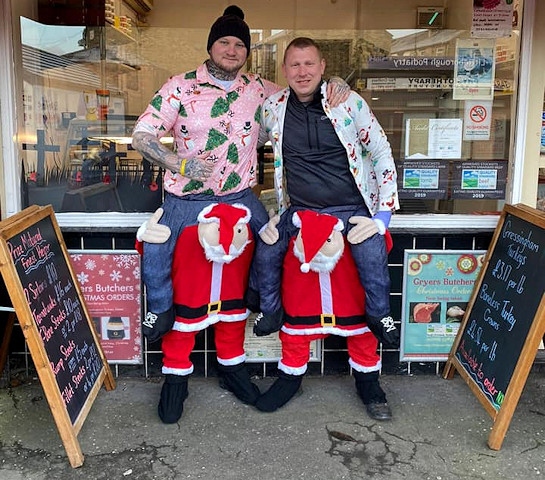 Stephen Bamford and Darren Rushton remain in good spirits, despite the break in

A break in at a popular Littleborough butchers is refusing to get the owners down, with the generous owners offering help to the thieves.

The burglary is believed to have occurred between Sunday and 7am on Monday morning (2 December), when owners Darren Rushton and Stephen Bamford arrived at work.

The thieves took around several hundreds of pounds’ worth of meat, plus donations for families in need, a laptop and an iPad after breaking through the back door of the Victoria Street butchers.

As a result, Darren and Stephen are looking at increasing their security measures.

Darren said: “If someone’s having troubles and is that desperate that they have to steal, please come and talk to us instead. We try to help a lot of people and we might even be able to help you.

“We’re only a small business and this is our livelihood, but hopefully our insurance will cover what we’ve lost.

“They won’t get us down, and we won’t be beaten. Already we’ve had people donating again so we can continue to help other families.”

The thieves also smashed a window at neighbouring business Sayers, before taking a number of goods. It is understood the thieves attempted to break into a safe, but were unsuccessful.

The incidents have been reported to the police.