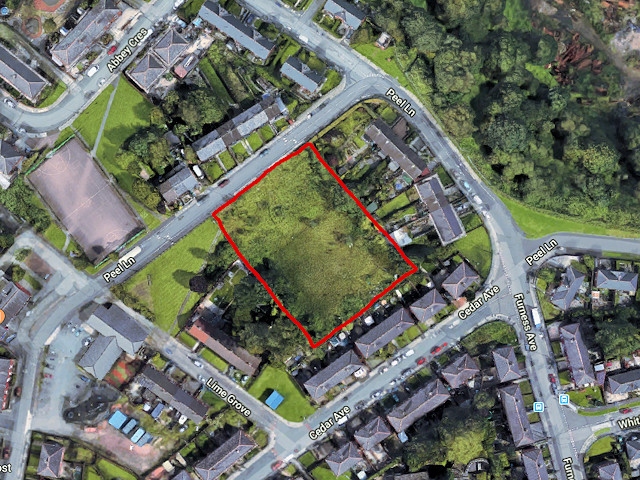 The site on Peel Lane, Heywood

New houses and apartments are planned for the site of a former Heywood pub – and they will all be available for affordable rent.

The proposal would see a 2.5 storey block of flats and 11 three-bedroom houses built where the Oddfellows Arms, in Back o’ th’ Moss, stood prior to its demolition some 15 years ago.

Since the Peel Lane pub was knocked down, no fewer than nine housing schemes for the land have been approved by Rochdale Council – but no work has ever begun there.

But New Charter Homes has now come forward with a ‘100% affordable’ project which it believes is badly needed in the area.

A planning document submitted by the housing association – which manages thousands of homes in Tameside – states: “The proposed development would deliver the sustainable development of a previously developed vacant site, providing much needed one and three bed units for the affordable rented sector in this area of Rochdale.”

The new homes would be served by 35 car parking spaces, while the nearest bus stop is 30 metres away, next to the Back o’ th’ Moss Community Centre on Peel lane.

Developing the 0.3 hectare site would not involve the felling of any protected trees and neither is the land classed as being at risk of flooding by the Environment Agency.

A design and access document statement submitted in support of the plans says the homes would improve the quality of the area.

It states: “The proposed residential development makes use of a vacant piece of land that has been left neglected to the detriment of the surrounding area.

“It is unlikely that the development will impact on local services, such as health care and school provision.

“The proposal will have a positive effect on the safety and security of the local area as natural surveillance will be increased and opportunities for crime and disorder minimised.”

It would be wholly grant-funded by Homes England, which would also control the occupancy of the properties.

A decision on whether to grant planning permission for the development will be made by Rochdale Council.