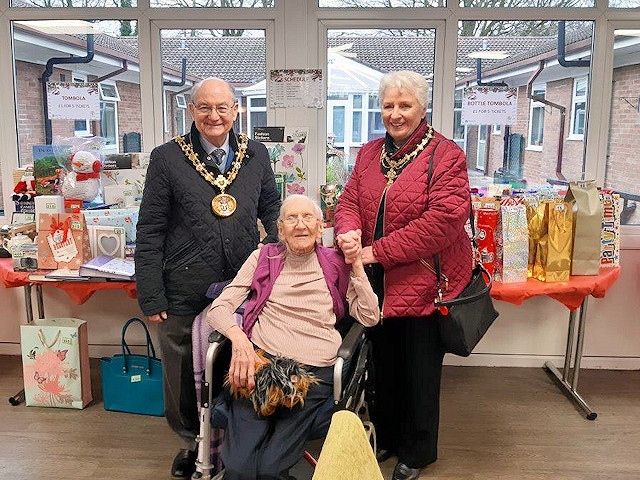 This weekly column from the Mayor of Rochdale, Councillor Billy Sheerin, is about the places he has been and the people he has met during the week commencing Monday 2 December to Sunday 8 December 2019.

One of the most enjoyable things about being the mayor is that I can entertain people who have achieved amazing things in Rochdale.

Back in November, I went to see a production by the ‘We Care’ film group, made up of local teenagers, which was very moving. The group created an inspirational film with the hope to prevent young children who are in care being bullied at school and to raise awareness of what being in care means. I was so impressed by the courage and honesty of the children involved and decided to reward them with an afternoon tea in the Mayor’s Parlour, which was a very enjoyable and fun afternoon.

On Tuesday (3 December), I officially opened the new Trade Centre at Sandbrook Park. The building has been through quite an amazing transformation; having gone in B&Q and Homebase for many years buying DIY supplies, to walk into a pristine car showroom of the highest calibre, I was seriously impressed with the layout and how they’ve taken the theme of Rochdale on board. Scenes of all local famous landmarks and people can be seen throughout the building, for example Rochdale Town Hall, Hollingworth Lake, Gracie Fields and the Pioneers Museum.

Having met with the senior management team, I know they are very focused and have brought a lot of employment into the borough. As the mayor, it is important that I welcome new businesses to the town and point them in the right direction if any assistance is needed, but I feel it is going to be a very successful adventure for the Trade Centre group as they had already sold 15 cars whilst I was there!

I wish them all the best for the future and thank CEO Andy Coulthurst for welcoming us.

Tuesday afternoon, I was invited to Horse Carrs in Shawclough for a Coffee Rockers event, organised by Home Instead. Senior citizens were invited, some with dementia, and it was amazing how when the 60s music started blasting, they were all up there giving it their all, singing along. I sat alongside a lovely lady called Vera and had a wonderful afternoon.

Thank you to Tracey Coatman for inviting me, I adore all the volunteers who were there helping on the day.

Tuesday evening, I went to The Royal Toby for the Catenian Association’s Christmas celebration. I have been a member of the local Catenian Association for 40 years now – a group based on the shared values of Catholic beliefs and practices - so was presented a certificate by the national president Phil Brown.

The current president of the Rochdale branch is Graham Sivills whose chosen charity this year is Caritas. Their motto is ‘ending poverty, promoting justice and restoring dignity’ based on nine core principles of Catholic Social Teaching. It was an enjoyable evening for both the mayoress and I.

On Wednesday (4 December), I was invited to the annual homeless event at Rochdale Infirmary. This event is held in winter and invites homeless people to come for health checks whilst providing them with new clothes and light entertainment in the run up to Christmas.

Staff at the infirmary gave out free hot meals and drinks, winter and outdoor clothes and Cosy Quilts donated 150 quilts for those attending, vital for the colder season. Christmas gift boxes with toiletries and personalised items, housing advice, podiatry and tissue viability advice services were also available, and choirs of school children entertained in the foyer. It was brilliant.

I finally had my flu jab; I thank Melanie Law for spearing my shoulder and saving me from the dreaded flu bug over the winter!

Thank you to Lynette Cook, the activities co-ordinator on the Wolstenholme unit at Rochdale Infirmary, Jacqueline Heatley, assistant director of nursing, and Jenny Currah. You have made Christmas a little bit merrier for the homeless in Rochdale.

Wednesday evening was the Mayor’s official ceremony of thanks for the borough’s Remembrance efforts. This initiative was introduced by Wing Commander David Forbes who wanted to officially recognise the efforts people put in to selling poppies and raising awareness of remembrance, as well as funds, and award them with certificates of recognition.

Cadets from the air force, army, navy, explorer scouts and more who had all collected ‘Poppy Appeal’ funds enjoyed a pie and pea supper before being awarded. Lots of businesses and the general public were there too who had made effort for remembrance.

One special award was given to Hilary Clegg who has, for too many years to mention, fully supported the Poppy Appeal. She sits for hours in Tesco every year with a collection bucket, so I awarded her with a beautiful poppy brooch to say thank you. This was a well deserved award to a lovely lady.

Thursday evening (5 December), Springhill Hospice’s ‘Light Up a Life’ service was held at St Chad’s Parish Church. I attended with the Mayoress, the Mayor of Whitworth Lynda Barnes, CEO of Springhill Hospice Julie Halliwell and the Bishop of Middleton, Mark Davies.

This is an annual event hosted by the hospice who invite the public to share special memories of the ones they love and light up their life at Christmas. St Michael’s School Choir from Bamford sang two wonderful carols and it was a really enjoyable evening, allowing all to reflect on what Christmas truly means.

Friday evening (6 December) was the very first Mayor’s Civic Charity Ball of the ten local authority mayors. The Mayor of Bury, Trevor Holt and his wife Evelyn, held the ball at Bury Town Hall with a 1940s/50s theme. This was a fabulous evening raising funds for his charity Bury Hospice.

Saturday (7 December) was a rather special day for me and my wife Lynn as we were invited to attend St Patrick’s School Church Christmas Fair. My wife grew up in St Patrick’s Parish and I was involved in the youth club in my late teens, so we have a lot of happy memories in St Patrick’s. We were delighted to have a blast from the past.

A lovely school choir greeted us at the start of the event before we browsed the stalls and we won a teddy bear in the raffle. The event had a traditional bottle stall, tombola, Gaelic coffee, mulled wine, mince pies and hot beef sandwiches which were delicious. It was a terrifically supported event and very well organised with lots of things to do.

Thank you to Mike Turner and Kate Cotton for inviting me.

Then we were invited to Rochdale Golf Club in the evening for Rochdale M.S Society’s Christmas Dinner. Again, this was a very pleasant event, organised by the hardworking chairman of the society Alan Baker.

There were lots of people at the dinner who were attending for the first time this year, but said it was brilliant to have this support network and the gave the society really good feedback. Everyone had a good time at this social event, so it was wonderful.

There were some very brave people in the room, who no one would even realise had MS. It was a delight to be there.

Sunday was a very busy day. We started at Springhill’s annual Santa Dash or Dawdle at Hollingworth Lake. The mayoress and I love to go to the lake for recreational activities and are happy if we manage to walk around it in a total of 45 – 50 minutes. The man who finished the Santa Dash first did so in 15 minutes!

I was absolutely delighted to see that the event involved both the young and old generation, which was wonderful, and we were really lucky with the weather. The Santa Dash is always a great fundraiser for the hospice.

Later, we travelled to Willows Dementia Hub for their very first Christmas Market event, where I cut the ribbon to open Santa’s Grotto. This was a very rewarding thing for me to do – attending the market - because it was last year when I was privileged to actually open the dementia hub as Deputy Mayor.

This Christmas market was a bit different to others in the borough as the hub had an ice-skating rink! Sadly, my Torvill and Dean days are over, so I had to decline having a go. I think I’d have spent more time on my bum.

It is extremely important to support St John’s Ambulance as they provide training programmes in first aid to help save lives in communities. They are a voluntary organisation that has been in existence for many years now and is still thriving.

Thank you to Ian Bithell from St John’s Ambulance for inviting me along.

There was a beautiful soprano singer entertaining us called Iona Fisher. It was absolutely stunning, she had an amazing voice as she belted Ave Maria. The Cadished Public Band also entertained with traditional Christmas carols along with Wright Robinson College (Gorton) School Choir who sang tunes such as Rudolph the Red Nosed Reindeer. It really got me into the Christmas spirit.

Nationally, in 2018, the Royal British Legion raised £50million and this concert contributed to these funds.