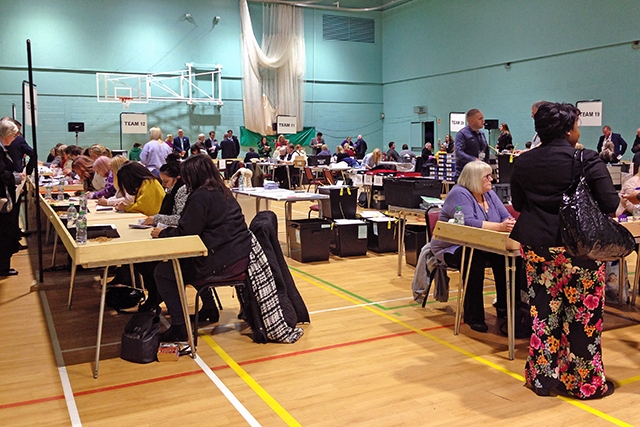 3.05am The results are as follows:

The result means Christopher Clarkson is the new MP for Heywood & Middleton, the first Conservative in its 36 year history, with a majority of 663 votes.

Former MP Liz McInnes put on a brave face until the very end, and left with a request to not talk to press.

2.40am The votes have been counted and a bundle count is now taking place after being requested.

The result is understood to be incredibly close.

2.00am Conservative candidate Chris Clarkson has arrived. He has refused to talk to Rochdale Online and have his photo taken until the result is announced.

1.40am Councillors and party members are starting to leave, but the four candidates who are here are still going strong. Chris Clarkson is yet to arrive.

Our reporters have tried asking local councillors why they think people have voted the way they have, but all refused to answer until the result has been announced.

1.00am Liz McInnes says she has been busy campaigning for the last six weeks.

She said: "It's been a very eventful campaign. I would have liked better weather and longer days. I've been out at doors, talking to constituents up and down the area with a massive team from Labour.

Addressing tonight's forthcoming result, Ms McInnes said: "We'll just have to see how it goes. We've had close results before, in 2014.

"I am surprised at how low the turnout figure is because the polling stations said they were busy. I suspect most people voted in the morning and daylight hours.

"If the predictions are right, the national picture isn't going well for Labour. The exit polls have been right for the past two elections, but it is what it is."

12.37am Liz McInnes has arrived and is in a very good mood. The only candidate who has not yet arrived is Chris Clarkson, the Conservative candidate.

The turnout has been announced as being 59.43% in Heywood & Middleton, below that of Rochdale's 60.3%. The turnout is lower than in previous years by around 4%.

12.20am Conservative councillor for Bamford, Patricia Sullivan, commented: "The Conservatives are feeling very optimistic. The postal vote results have been really good, as well as canvassing on a whole. We don't know what the results are going to be, you can never tell, but the exit poll is unbelievable.

"If we have won in Heywood and Middleton then it will be amazing. It will be refreshing to have a young MP who will attract younger people to the party."

Nigel Ainsworth-Barnes, who is standing for the first time this year representing the Green party, said: "The Greens are doing reasonably OK. Everyone I have spoken to has been really positive and said they like our party's values. We are only a small group, and it has been more difficult to campaign in the recent weather, but locally we are doing OK.

"I hope people keep us in mind for the future."

12.18am The verification process is expected to be completed shortly, and then the count will begin.

11.57pm Since its creation in 1983, the Heywood & Middleton seat has always been held by Labour, having had three MPs over the years: Jim Callaghan, Jim Dobbin and Liz McInnes.

Ms McInnes was first elected MP for Heywood & Middleton in a 2014 by-election held following the death of Jim Dobbin (Labour) who had been MP for the area since 1997.

11.35pm Councillor Aasim Rashid, Labour councillor for Castleton, says the postal vote was almost 50/50 between Labour and the Conservatives.

He says that Labour are still optimistic they will win.

11.27pm Brexit Party candidate Colin Lambert says that it is looking like the Heywood and Middleton vote will be a "Conservative landslide."

He continues: "This is reflective of what is happening across the country, and Labour is facing annhilation."

Meanwhile, Councillor Alan McCarthy, who stood as the Brexit Party's candidate for Bury North, says he hasn't won there, and the seat is looking like a Conservative win.

11.20pm Labour councillor Ray Dutton says he believes Labour has lost some voters to the Conservatives because of Brexit. He adds: "Politics has been changed forever."

He says "there is more blue than I expected" but of his votes, he "hopes the Lib Dem message has resonated with people who want to stop Brexit."

10.44pm Brexit Party candidate Colin Lambert is one of the first to arrive. Mr Lambert is a former Labour council leader for Rochdale, having defected to the newly-formed Brexit Party earlier this year.

10.38pm The ballot boxes are still arriving, and the verification process of the ballots has begun. Several local councillors for the Labour party are present including Liam O'Rourke, Billy Sheerin and Peter Rush.

10.05pm The polls have closed and the first ballot box has been brought through from the polling station here in the Sports Village.

The candidates in today's election are:

View the candidates' pitches at: