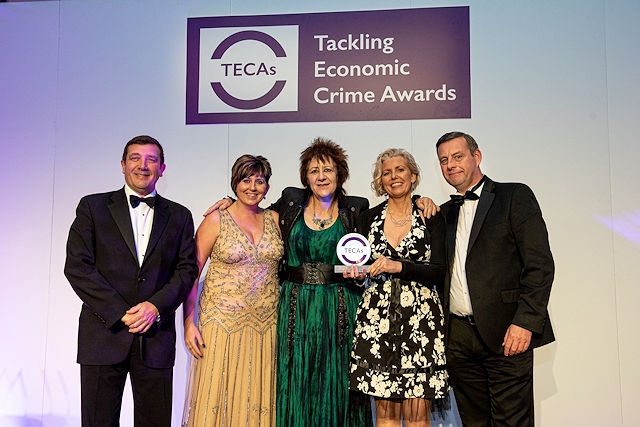 The Tackling Economic Crime Awards (TECAs) are open to anyone working in the UK, operating in the public and private sector. The TECAs recognise organisations and individuals who have made a significant contribution to targeting cybercrime, and celebrates the success of on-going hard work.

The prestigious awards ceremony was held at the Sheraton Grand Hotel, Park Lane, London and was attended by officers and staff from the CECAS team.

CECAS was launched two years ago with the aim to raise awareness of fraud and the impact it has on victims. The team won in the ‘Outstanding Customer Service Initiative’ category.

CECAS was created due to the large numbers of fraud and cybercrime victims being recorded nationally, but not locally, so were hidden from usual crime recording standards. The service works closely with Action Fraud, EVCVU, the banking sector and third-party support agencies to provide advice and support to vulnerable victims of fraud as well as those identified as potential future victims. So far, 2,150 victims have been supported through CECAS. There has only been two CECAS victims that have been secondary victims of fraud.

Graham Atherton, the manager of CECAS, said: “We are extremely proud that our efforts to protect and support victims of fraud within the Greater Manchester community have been recognized. We were up against tough competition and I feel very proud of the hard work from all of the team which has made this possible.

“Cyber criminals continue to increasingly complex strategies which they use to extort innocent people. The work we do looks to help everyone be more resilient to fraud and cyber-crime., in turn helping safeguard the Greater Manchester community.”

Deputy Mayor for Policing and Crime, Bev Hughes said: “I am really pleased that the Cyber and Economic Crime Awareness Service has been recognised for its customer service initiative and winning an award at the National Tackling Economic Crime awards – all team members should be extremely proud of this achievement.

“Online fraud and cyber-crime are an increasing threat in Greater Manchester, as it is right across the UK, and it is great to see the Cyber and Economic Crime Awareness Service working so proactively raising awareness of this kind of crime and protecting our more vulnerable people.”