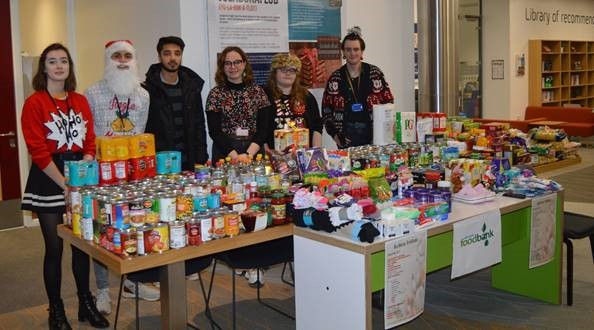 Overwhelming amounts of food and essential items have been donated to Rochdale Foodbank and Rochdale Sanctuary Trust Soup Kitchen by generous students and staff at Rochdale Sixth Form College ahead of a difficult time of year for those in need.

Donations were collected by the Students’ Union at Rochdale Sixth Form College in exchange for wearing a Christmas jumper for the day. A whopping 377kg (over 1/3 of a tonne) of food was donated to Rochdale Foodbank, with even more items donated to the local soup kitchen.

Richard Ronksley, Principal of Rochdale Sixth Form College said: “This is quite staggering and humbling. Students and staff today brought in huge quantities of food and toiletries for the Rochdale foodbank. It is a testament to the generosity and community spirit of staff and students who have donated so much to this cause to support families in the borough over the Christmas period”

Rochdale Foodbank has recently marked seven years of operation and last year, more than 6,600 three-day emergency food supplies were given to people in crisis, providing more than 2,200 children with provisions.

Donations for Rochdale Foodbank can be made at:

At the back of Rochdale Foodbank on South Parade, Rochdale, OL16 1LR - Opening hours are 11.00am – 12:45pm Monday to Friday. A member of staff will greet you and make sure your donation is safely booked in.

Wendy Fell, Rochdale Foodbank, said: “2019 has seen yet another substantial rise in year on year referrals (23% on average in recent months) and food poverty remains a big problem in the Borough. Regular donations are vital in order to meet this demand and we are very appreciative of the support from the college.”

In the years since its inception, Rochdale Sixth Form College has raised thousands of pounds worth of donations for local and national charities. In the New Year, they will be looking to raise more than ever.