You are Here: Home » News » News Headlines » Metrolink line to the Trafford Centre expected to open seven months ahead of schedule 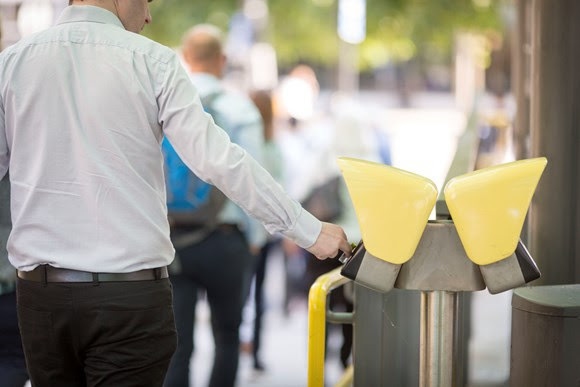 Local residents wishing to shop at the centre will be able to change lines at Cornbrook, then choosing the new Trafford Park Line from Pomona

The Trafford Park Metrolink line is set for an early opening as tram tests reach the Trafford Centre.

Trams on the new £350m line are now expected to start operating from April 2020; seven months ahead of schedule.

That opening date is subject to final testing and driver training, the Mayor of Greater Manchester has announced.

Andy Burnham was joined by representatives from Trafford Council, intu Trafford Centre, contractors M-PACT Thales and Transport for Greater Manchester for a preview of the line this morning, to mark the start of tram testing on a section of the route to the Trafford Centre.

The project was the first to benefit from the region’s Devolution Deal, signed by Greater Manchester leaders and central government, in November 2014, and received a £20 million contribution from Trafford Council.

Once complete, transport bosses say it will represent a significant step towards an integrated public transport system across Greater Manchester that hopes to make travelling around the city-region easy, accessible and affordable.

Andy Burnham, Mayor of Greater Manchester, said: “With Metrolink we are once again able to demonstrate a track record of delivering major schemes on budget and ahead of schedule.

“TPL was the first project to benefit from the devolution deal and is a shining example of what we can achieve with the right powers and funding.

“There is no doubt it is a blueprint for how Greater Manchester could run other transport systems in the future and represents a key step forward on our journey towards a more integrated, London-style transport system.”

The project marks the last of Metrolink’s £2 billion decade-long expansion programme, which has seen new lines to East Didsbury, Ashton-under-Lyne, Rochdale via Oldham and Manchester Airport.

Local residents wishing to shop at the centre will be able to change lines at Cornbrook, then choosing the new Trafford Park Line from Pomona, the stop after Cornbrrok.

The Trafford Park Line will run through zone 2 and zone 3.

Councillor Andrew Western, leader of Trafford Council and Green City Region lead for Greater Manchester Combined Authority, said: “The opening of this new tram line will be hugely important for the local and regional economy.

“Trafford Park provides jobs for thousands of people as well as attracting millions of visitors a year who come to enjoy the many leisure opportunities that are available. That’s why it’s important that we will soon having trams linking some of the most iconic visitor destinations in the North West.

“Also, it’s just as important for our efforts to create a greener region as it will offer a real transport alternative to people who would otherwise be driving their cars to watch Manchester United play or visit places like the Imperial war Museum.”

It will also run through Trafford Park, Europe’s largest trading estate and home to more than 1,300 businesses employing over 35,000 people.

Alison Niven, centre director at intu Trafford Centre, added: “We’re delighted to finally realise our long-standing goal to bring Metrolink to the centre. The new line will offer visitors a sustainable transport option, contributing to the GM Clean Air Plan and offering an alternative to the car for the various destinations along the new line.

“2020 will be a pivotal year for the centre, with the countdown now on to the official opening of the Trafford Park line, the launch of Primark, and completion of the £75million development of Barton Square.”

The Trafford Park Line will add to what is already the biggest light rail network in the UK, bringing the total number of Metrolink stops to 99.

Public support for the Trafford Park line was established at a major public consultation in summer 2014, where 89 per cent of respondents were in favour.