Marathon effort as runners raise over £8K for Springhill Hospice 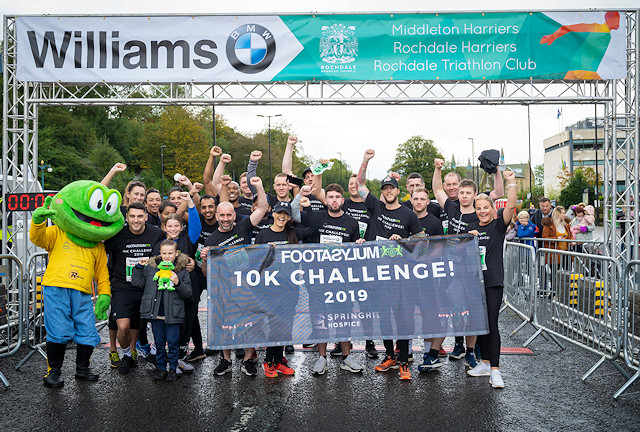 One of the teams who chose to fundraise for Springhill Hospice was Footasylum, with runners from stores nationwide making the trip to Rochdale for the event

Runners who hit the road for Williams BMW Rochdale Half Marathon, 10K and Fun Run last October helped raise over £8,000 for Springhill Hospice.

The event saw its highest number of entrants, with many choosing to run for the hospice, the event’s official charity.

A total of £8,100 was raised for Springhill Hospice from a combination of online and cash sponsorship collected by runners. The hospice provides specialist palliative care to patients and their families from diagnosis to end-of-life through a range of services.

Julie Halliwell said: “This event is wonderful and we’re so grateful to everyone who took part in the Williams BMW Rochdale Half Marathon, 10K or Fun Run to raise money for our work. The total raised is fantastic and it will make a real difference to help local people living with life limiting illnesses.

“Thanks to all our supporters, volunteers and donors. It’s absolutely brilliant that we get so many raising money for us. We all really appreciate the support and we’re already gearing up to encourage even more entrants to run for us this October.”

John Connor, head of business at Williams Rochdale BMW said: “It was superb to see so many entrants this year and to raise over £8,000 for Springhill Hospice is a real achievement. I know how much training and hard work has gone into this effort. Williams Rochdale BMW is committed to supporting the town, and most importantly raising more money for good causes.”

Councillor Janet Emsley, cabinet member for neighbourhoods, community and culture, added: “Huge congratulations to all the runners who ran for the hospice, a cause which we are only too happy to support and I hope to see us beat this target next time.  I also know that runners have raised money for many other charities so it shows what a difference this event is making and the final total runs into tens of thousands of pounds.”

Williams BMW Rochdale Half Marathon, 10K and Fun Run returns on Sunday 4 October 2020 and you can enter online now and get tips for charity fundraising at: www.rochdale.gov.uk/run