You are Here: Home » News » News Headlines » Dippy the Dinosaur arrives in Rochdale next month

Dippy the Dinosaur arrives in Rochdale next month 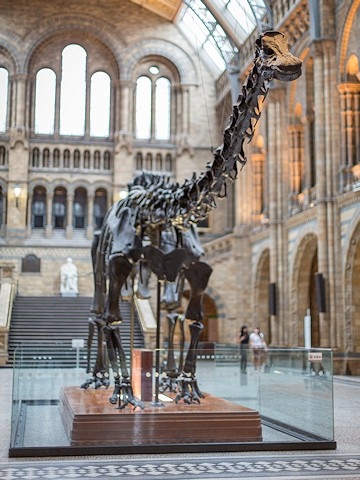 Dippy arrives in Rochdale next month

The long-awaited arrival of Dippy the Dinosaur is almost upon us, as the UK's most famous dinosaur arrives in Rochdale next month.

Dippy, a 21m-long plaster-of-Paris cast of a Diplodocus carnegii skeleton, will be at Number One Riverside in Rochdale town centre between 10 February and 28 June 2020.

The Natural History Museum’s famous dinosaur left the museum for the first time in 2017 to embark on a national tour and Rochdale has been selected as one of his stops – the only North West stop on the tour.

Known to millions from its usual home in the Natural History Museum, Dippy – which belongs to a group of dinosaurs called sauropods – will be used as the centrepiece of a display that will highlight local natural history and nature collections.

Living between 156 and 145 million years ago, the diplodocus was first described as a new type of dinosaur in 1878.

When railroad workers unearthed the fossilised bones of a diplodocus in Wyoming, USA, in 1898, newspapers billed the discovery as the 'most colossal animal ever on Earth'.

After hearing the reports, Scottish-born millionaire businessman Andrew Carnegie set out to acquire the bones as a centrepiece for his new museum in Pittsburg.

During the reconstruction of the skeleton at the Carnegie Museum, experts discovered subtle differences from the two other diplodocus species known at the time, Diplodocus longus and Diplodocus lacustris. As a result, the new species was named Diplodocus carnegii in honour of its owner.

King Edward VII saw a sketch of the diplodocus while visiting Carnegie at his Scottish castle and remarked how much he'd like a similar specimen for the animal galleries of the Natural History Museum. Carnegie obliged by commissioning a replica cast of his dinosaur.

Mirroring this success, Dippy on Tour has proved a record breaker, with over 1.5m people visiting the much-loved dinosaur at his tour stops so far; Dorset, Birmingham, Belfast, Glasgow, Newcastle and Cardiff.

Councillor Janet Emsley, cabinet member for culture, neighbourhoods and community at Rochdale Borough Council, with responsibility for Link4Life, said: “We want everyone’s visit to see Dippy to be just the start of their journey to lots more natural history adventures.

“That’s why we’ve put on a huge range of fantastic events to create a festival atmosphere which will keep visitors entertained for the duration of his stay and hopefully spark a lifelong love of the natural world in our young people.”

Rochdale will be the penultimate stop, before the tour finishes at Norwich Cathedral in October 2020.

Dippy on Tour: A Natural History Adventure, is being brought to Number One Riverside and visitors across the UK by the Natural History Museum in partnership with the Garfield Weston Foundation, and supported by Dell EMC and Williams & Hill.

An accompanying Dippy exhibition will be hosted at Touchstones Rochdale.

It’s free to see Dippy and visit the Dippy exhibition.