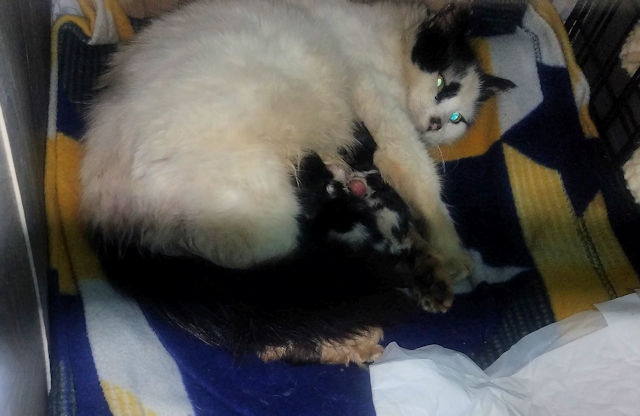 Sue Hancox, from Newhey has been rescuing cats from a young age. In 2018, she founded Bart’s Legacy Cat Refuge, an independent non-profit refuge which runs on donations in an effort to save and re-home stray local cats.

Sue started Bart’s Legacy after receiving a call from a friend in May 2018, who informed her that a cat had given birth in the front garden of a house in Newhey. She rescued the three new-born kittens and their mother, who she had been trying to catch for over a year.

“I got to the family home, and my son called mum-cat Marge, and as the kittens were two girls and a boy, they got called Lisa, Maggie and Bart. Unfortunately, the whole gang contracted cat flu. I managed to nurse them all through it, but Bart's left eye became badly infected,” Sue explained.

Sue started fund-raising to save Bart’s eye, as well as managing to save some money which she used to purchase equipment to facilitate the cats.

She added: “After Bart and his family were rehomed, the rescue suddenly took off. And as Bart's eye fundraiser paid for the anti-spit panels, pens etc, it only seemed fitting it was named after him.”

Until late 2019, the cats stayed in Sue’s room but with help from friends, she has transformed her cellar into a shelter. She has one double large pen for local cats in need, and another double large pen an emergency for ferals or strays that other rescues have trapped.

Over time, Sue has gotten to know some other independent rescuers who have been bringing cats to her for the past 12-18 months.

Sue has helped pregnant queens give birth in safety, abandoned cats with chronic skin conditions and cats with injuries, even rescuing one cat - Belle - who was being offered on a mobile application for free.

Belle has now been rehomed and is thriving, having been settled alongside another Bart’s cat, who came into Sue’s home on the same day.

Sue, who also helps rehome for the Rochdale Cats Protection, continued: “Belle was taken to Crown House Vets as she had a wobble, and we thought she may have had nerve or spinal damage. Luckily she had no damage to her spine and is now blooming in a fantastic home.”

Sue has most recently taken on Mr Pickles, an elderly cat who required dental work, and a stray cat who gave birth to five kittens in a rabbit hutch.

Mr Pickles, 13, was found in a shed in poor condition, but no-one has come forward to claim ownership. His dental work is estimated to cost between £200 and £250, and he has now been reserved.

They join Regina, a long-haired black female who is scared of humans; Will and Grace, whose owner was moving; Bentley, whose owner’s landlord wouldn’t let her keep her; and Sunshine and Sophie, who were brought in after their owner was taken very ill.

Sue hopes anyone who can will donate to Bart’s Legacy, as expenses are rising, and she also wishes to improve the cats’ facilities. Food and litter are always a priority.

Anyone wishing to help Sue and Bart’s Legacy can donate via: