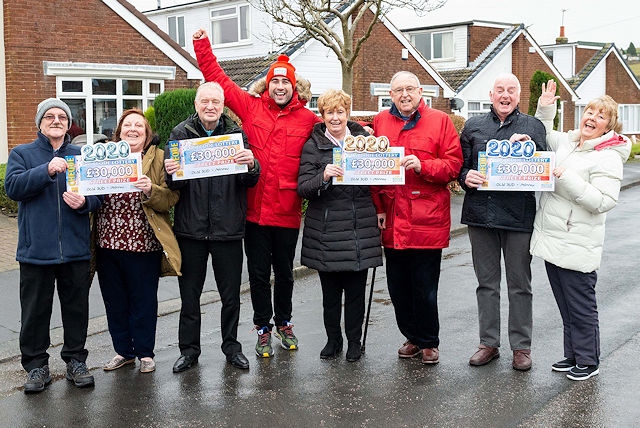 2020 is shaping up to be an exciting year for 10 residents in Milnrow, after they each won £30,000 with People’s Postcode Lottery.

The Derwent Avenue neighbours scooped the cash after their postcode, OL16 3UD, was announced as a winner on Wednesday 8 January.

Robert Greenhalgh, 70, was one of the winners, and along with his wife Delma, jumped in shock when he was presented with his cheque for £30,000. He said: “This is the best surprise we’ve had for a while! I never thought I’d see the red jackets in our avenue. I wished I could and now my dream has come true.”

Robert, a retired joiner, has always wanted to visit the Panama Canal in Central America. He said: “It’s always been a dream to visit the Panama Canal, it’s been on my bucket list for ages. You need to be careful when you go that you don’t get caught in monsoons, so we will probably wait until the end of the year to go. It’s something to look forward to though!

“Our daughter has just moved into a new house, so we’d love to help her out with some money too. She’s a teacher and the kids in her class will be just as excited as her to find out what we’ve won.”

Roy Staples, 81, was another Milnrow local picking up a cheque, alongside his wife Sheila. When he found out how much he’d won, Roy said: “Gordon Bennett! I never expected that! I’m in a state of shock. You’ve brightened up a very dull January.”

When asked what he’d spend the winnings on, Roy said: “Sheila will have it earmarked already! Our daughter and son will get a share of course. Our granddaughter is 20 and saving up for a car so we will have to treat her too. We’ll celebrate with the family soon but I’m still recovering from New Year’s Eve.

“When we found out you were coming round we couldn’t sleep because we were so excited. Often you lie awake at night worrying about things, so this was a nice thing to be awake thinking about.”

Les commented that he ‘might have a little tipple’ to celebrate but will likely only spend the win on his family. With five kids and 14 grandchildren (including 10-week-old Erin who was there to see her grandad receive his cheque), there are plenty family members to treat.

“I just want to share it with the family and give everyone a bit. You get to an age where there’s nothing you want apart from a happy life.”

Derek Charles, 69, was over the moon with his win. The first thing he said was: “This is fantastic – you’ve made my day!”

Derek’s wife, Gaynor, was at work when the People’s Postcode Lottery team visited, but Derek was excited to celebrate with her with a bottle of wine and something special for dinner. He commented: “I’m going to tell my wife to book another cruise as soon as she comes home. We’ll go to Dubai as she loves the shopping malls.”

There were another six winners in the postcode who were not available to receive their cheques in person, however the money will be paid into their bank accounts.

People’s Postcode Lottery ambassador, Matt Johnson, was in Milnrow presenting the winners with their cheques. He said: “I had a lovely morning meeting our winners in Milnrow. It was a cold day but all of them were kind enough to invite us in and give us a cup of tea. I’m chuffed for them all and it sounds like they’re all going to be very generous to their families with their winnings. I hope they also treat themselves to a little something though!”

A minimum of 32% of ticket sales goes directly to charities and players of People’s Postcode Lottery have helped raise more than £500 million to date for good causes across Great Britain and internationally.

The draw was promoted on behalf of Cats Protection, a charity that helps around 200,000 cats a year through its network of 36 centres and more than 250 volunteer-run branches. The charity rehomes unwanted cats and provides education to teach people about the welfare of their pets.