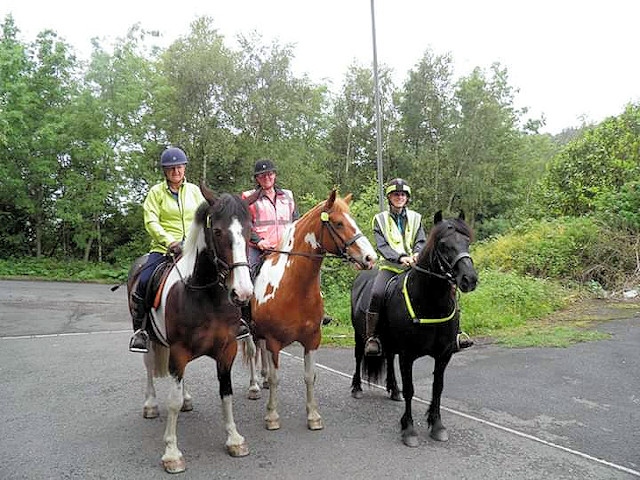 The Milnrow and Newhey Bridleways Group has thanked the Co-op for a mammoth donation to help repair a hazardous byway in Milnrow.

Chosen as a Co-op local cause between October 2018 and October 2019, the local bridleways group received £3,356.69 through the funding, which will help repair Carr Lane.

Members of the Co-op receive a 5% reward when buying own-branded products, and the Co-op also donates a further 1% to local causes.

Inadequate drainage had led to the surface being washed away, resulting in exposure of slippery bedrock and a rocky sandstone terrain which is hazardous to negotiate on horseback, bike and even foot.

Secretary Nicola Tonge, who restarted the bridleways group in 2016 after her pony fell on the lane, said: “We would like to thank the Co-op and the Co-op members for choosing us as a local cause and for donating so much to us.

“The council has plans to keep working on Carr Lane each year until it is in a good state of repair. This money will contribute to that and in turn help maintenance of all bridleways, for which we are so appreciative.”

The group has handed the money over to Environmental Management at Rochdale Borough Council.

Additionally, the local township members have also provided a total of £5,000 towards the repair of Carr Lane.

A spokesperson for the council said: “These extra funds are a major help and a huge thank you to Nicola and Milnrow Township for their contributions to assist in the repair of Carr Lane. This substantial sum which will be a superb help towards any repairs being carried out to ensure the bridleway running along Carr Lane can be enjoyed by members of the public.

“The council will continue work along the bridleway surface to ensure there is a link to the network of recreational routes already available for use by for the general public.”

For over three years, the Milnrow and Newhey Bridleways Group has called for urgent renovation for Carr Lane to safeguard local people whilst preserving the historically and geographically important right of way.

Some repairs were carried out in 2018, with the group working closely with Environmental Management at Rochdale Council to improve the surface of the treacherous path.