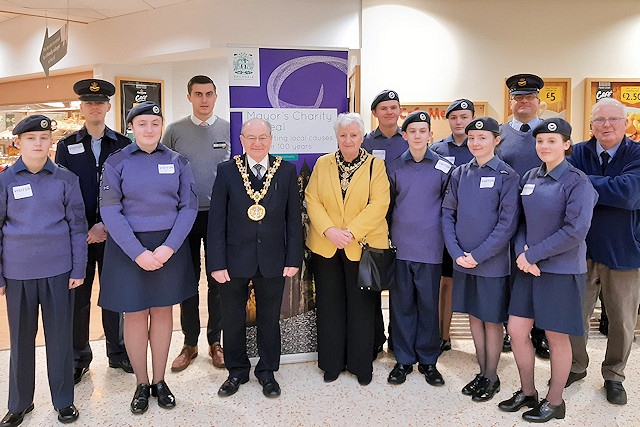 This weekly column from the Mayor of Rochdale, Councillor Billy Sheerin, is about the places he has been and the people he has met during the week commencing Monday 7 January to Sunday 12 January 2020.

Tuesday 8 January, I attended the funeral of Alan Wilson who was the organist at Rochdale Town Hall and had been for many years.

Alan did a lot of voluntary work for the town hall: when there was a public tour booked, he would voluntarily come along and play the organ for attendees on a monthly basis. This was great because after attendees received information about the organ they could then sit and enjoy the music. Alan also organised and was on the committee for the organ recital group that play regularly at the town hall, having four or five recitals a year.

The Mayor’s Office attended his funeral to show our respect and give thanks on behalf of Rochdale Town Hall. He was such a lovely man.

The weekly Veterans’ Breakfast Club was held in the Clock Tower Dining Room on Thursday (10 January). This was the first session of the new year and, like always, was well attended.

The breakfast club is a much appreciated get together for the veterans and it is great to see so many of our local veterans enjoying themselves, eating wonderful food and telling stories of the past to one another. It really is a rather special atmosphere in the Clock Tower Dining Room when the breakfast is being served.

Long may it continue.

Friday 11 January I was invited, along with all the other local mayors, to the Showman’s Guild Annual Luncheon. This year it was hosted by the showmen of the North West of England at Crow Wood in Burnley.

The Mayor of Burnley, councillor Anne Kelly, welcomed the showmen to Crow Wood; the place was packed.

What was really good at this event was I found out lots of information about the showmen, what they do and where they travel. For example, they put Christmas markets on, fetes and fairgrounds all over the place. It is amazing the things they do. There are guilds all over the country but this one is specific to the north west.

The function is held annually by the guild to say thank you to the many local authorities that allow them to do business over the course of the season. The showmen have been looked down upon in the past as ‘travellers’ – a reputation of which they detest. They consider themselves different. What we were informed is that in the next census, there will be a separate category for them describing what they are about.

Also in attendance was Sir Lindsay Hoyle who has been elected as the new Speaker of the House of Commons.

The mayoress and I sat with the mayor and consort of Bolton, councillor Hilary Fairclough and her husband Don. It was a very enjoyable event; long may the tradition of fun fairs continue.

My engagements on Saturday started with a charity bag pack at Morrisons in Heywood. Wing Commander David Forbes organised this with the 2301 Heywood Squadron – RAF Air Cadets to raise funds for the Mayor’s Charity Appeal.

The mayoress and I attended to show our appreciation to the cadets who were giving up their Saturday morning to help our chosen charities: Springhill Hospice, Hydro Pool, M6 Theatre, Parkinson’s UK, Leukaemia UK and Shopmobility.

I questioned every one of the cadets ‘were they enjoying being a cadet’ and not one of them had any negative comments about being a member. They were all polite and an absolute credit to the squadron and their parents. Here’s a list of the names of those participating:

Many thanks to all of the cadets for volunteering.

I then went to Drake Street in Rochdale town centre for the official opening of a new business - Dollz Beauty Salon. I cut a ribbon and a cake with the mayoress to officially open the premises, owned by business partners Ayesha Kevin and Farrah Siddiqi.

It really gladdened my heart to open this new business because Rochdale needs more shops to open on Drake Street. I was really pleased the ladies chose to open the salon in the heritage action zone of Drake Street.

The premises are very pristine, offering hairdressing and nails, and I hope the ladies can build long-lasting relationships with new clients.

Best of luck for the future.