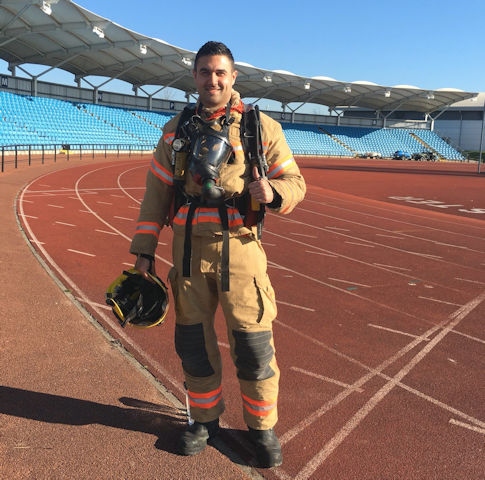 A Rochdale policeman-turned-firefighter will be climbing the UK’s highest mountain in full uniform this summer to raise money for the families of those affected by the Manchester Arena bombing.

Aaron Parmar, who was a police officer at the arena on the night of the tragic attack in 2017, will be climbing Ben Nevis on 23 July, wearing around 30kg of fire-fighting equipment, including breathing apparatus.

The tough ascent and descent will take longer than the average eight hours’ completion time, taking around 12-13 hours, Aaron estimates.

He said: “I think I have underestimated how hard it will be. I have been training hard and I do enjoy the challenge, pushing myself for something that is a worthwhile cause.

“I’m back in the gym, doing plenty of cardio with running and cycling, and I’m also concentrating on deadlifts and work on my back, as the equipment isn’t really designed to be worn for a long time.”

Aaron hopes to raise £1,000 from the 1,345 climb, which he will split between the trusts and charities set up by the victims’ families: Liv's Trust CIO, Chloe & Liam Together Forever Trust, The Remembering Nell Foundation, Eilidh’s Trust, The Megan Hurley Foundation, and 22MCR.

After moving to the fire service, Aaron previously ran 22 10k races in the victims’ honour, raising thousands of pounds for their families.

Aaron completed the races with the Great Manchester Run in memory of eight-year-old Saffie Rose Roussos – the youngest victim – in his full firefighting uniform.

Following the last 10k race, Aaron decided he wanted the good work to continue, so set up an online running club in memory of the 22 victims, Hive 22, which also raises money for the aforementioned trusts and charities.

Some of the club members and families will be joining him in Scotland, with several Hive 22 members joining in the climb and providing support.

Donations can be made via Go Fund Me here: