You are Here: Home » News » News Headlines » The new £20 note will be issued next month

The new £20 note will be issued next month 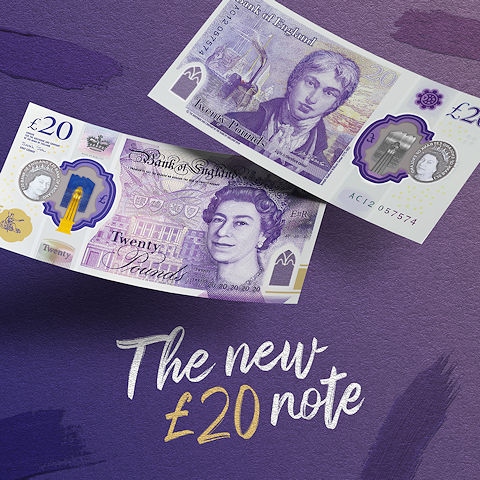 The new polymer £20 notes will be issued for the first time on 20 February 2020, featuring the artist JMW Turner.

The polymer £20 contains sophisticated security features making it the most secure banknote yet, according to the Bank of England, including two windows and a two-colour foil, which the Bank of England says makes it 'very difficult' to counterfeit.

The new note will also contain a tactile feature to help vision impaired people identify the denomination, like the polymer £10 note.

Paper £20 notes can be spent as usual and will be gradually withdrawn as they are banked by retailers and the public. Notice will be given six months ahead of the paper £20 being withdrawn.

Commenting on the new note, Governor Mark Carney said: “Our banknotes celebrate the UK’s heritage, salute its culture, and testify to the achievements of its most notable individuals.

“The new £20 note celebrates Turner, his art and his legacy in all their radiant, colourful, evocative glory.”

The new £20 note will be the first to feature the signature of Sarah John, the Bank’s Chief Cashier.

The polymer £20 note will join the Churchill £5 and the Austen £10, which were respectively introduced in September 2016 and September 2017.

During World War Two, Turing was instrumental in breaking the German Enigma code, leading to Allied victory over Nazi Germany.