GMP officers and staff recognised for work with military community 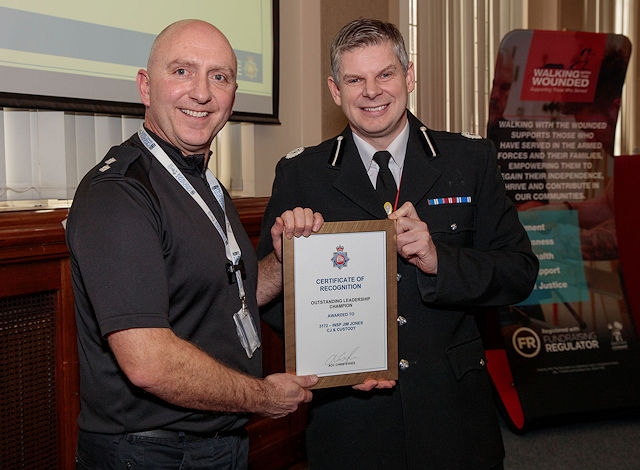 Eight police officers and staff have been awarded with certificates at an Armed Forces recognition event at Sedgley Park, Prestwich.

Certificates were awarded on Monday 27 January by ACC Chris Sykes to the following GMP officers and staff for their contribution to the Supporting Our Armed Officers Steering Group:

ACC Chris Sykes said: “GMP proudly supports our Armed Forces. The hard work of our steering group has been fundamental in forming the strong relationships we have with the military community.

“This recognition event gave me the opportunity to thank everyone involved and recognise the valuable skills service leavers and veterans bring into the organisation.

“We have come a long way in the last few years improving the support we provide and we are currently working towards the Employer Recognition Scheme Gold award, as we continue to improve the services we provide in the community for military veterans and their families.”

The event was held to recognise the work which Greater Manchester Police (GMP) does throughout the year. GMP’s Supporting Our Armed Forces Steering Group works all year round to engage with the military community and build lasting relationships.

This has included encouraging the recruitment of military service leaders, maximising the transferable skills of the veterans and reservists GMP employs and supporting veterans in the Greater Manchester community.

Some military veterans can find it difficult to transition back into civilian life once they have left the Armed Forces. They have gone from an extremely regimented environment to a less rigid lifestyle, one which possibly lacks the purpose and the structure they become accustomed to and this stark change can be a struggle. GMP aims to support the veteran community across Greater Manchester by helping to make this transition easier.

The event was opened by GMP’s Assistant Chief Constable (ACC) Chris Sykes, and was attended by the steering group, as well as Armed Forces Leads and District Chief Inspectors who were all proud to show their support.

Veterans also attended, sharing their inspirational stories of their journey from leaving the Armed Forces and the support they received transitioning back into civilian life.

Both the MoD and GMCA highlighted that GMP’s Support Our Armed Forces Steering Group is not an initiative replicated anywhere else to their knowledge across Greater Manchester, Lancashire or Cumbria and they are recommending GMP’s approach as best practice.

This year, GMP is aiming to receive the Armed Forces Covenant Employer Recognition Scheme Gold Award, the highest badge of honour available to those that employ and support those who serve, veterans, and their families, and is currently only held by three other police forces across the country.

GMP will be the first force in the north of the country to achieve this recognition and it demonstrates a commitment to those who are either serving or have served in Reserve Forces or Regulars and their family members.