You are Here: Home » News » News Headlines » Rochdale Music Service teams up with Bridgewater Hall for series of live shows 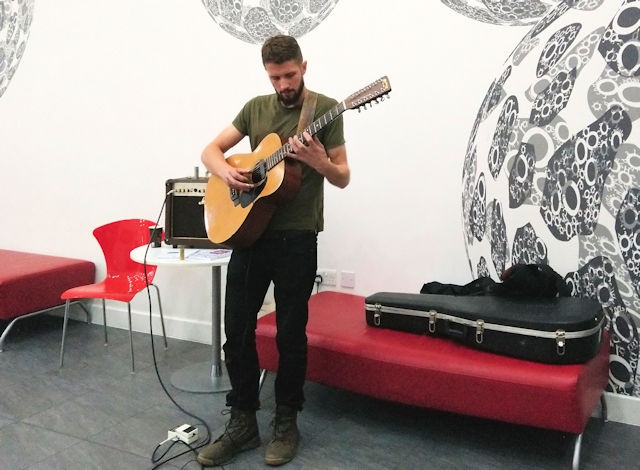 The series gives a platform to emerging singer songwriters of all ages in the Greater Manchester area; with a focus on showcasing original song writing. It began at Bridgewater Hall and is now being taken to other areas. Rochdale is the first stop, marking an important partnership between the two musical organisations.

The Rush Hour Social sessions will be held in the foyer at Rochdale Leisure Centre from 5.30pm to 6.15pm and are free to attend so no tickets are required. Previous artists who have taken part in the Rush Hour social events include George Fell and Claire Mooney.

Councillor Janet Emsley, cabinet member for neighbourhoods, community and culture, said: “This is a massive achievement for Rochdale to have a partnership with such an esteemed musical organisation like The Bridgewater Hall. I love the concept of seeing live music, with a local connection, at a normally busy and stressful time in the unusual performance space of the leisure centre. There is a wonderful series of events on offer that it will be delightful to be part of.”

Thursday 13 February 2020 – The Blazing Snowmen emerged out of Manchester's alternative music scene in the early 1980s, they weave and narrate the stories of our everyday lives, looking at themes such as relationships, ageing, obsession and restlessness. Influences include The Beatles, The Kinks, Ivor Cutler, and David Bowie.

Thursday 23 April 2020 – Charlie Pink is an acoustic duo made up of Charlie Pink and Darren Lea-Grime. They have a warm, melodic and mellow style, driven by reflective lyrics. Their song writing has been influenced by their Manchester musical roots, with influences including John Bramwell (I am Kloot) and Bryan Glancy.

Thursday 14 May 2020 – Sanja Cin  was born in Bosnia and Herzegovina but due to the civil war, Sanja and her family found refuge in Austria. After several years spent in Vienna, she landed by surprise in Manchester where she recorded her debut solo EP. Her sound, although rooted in pop, takes surprising turns, playing with structures and melodies, quietly bypassing predefined routes.

Thursday 11 June 2020 – Richard Knott will showcase his dexterous guitar work, rooted in the styles of his early blues and folk fingerpicking heroes like Stefan Grossman, Leo Kottke and Ralph McTell. He has whip-smart, wryly observed song writing to create a fresh and entertaining take on the traditional singer/songwriter format.

Thursday 9 July 2020 – The Slow Approach are fuelled by lyrics and song ideas that are a stylistic evolution of the blues and folk roots which lead singer Lee Parry spent his formative years immersed in, The Slow Approach's current sound is now reminiscent of the likes of Lucy Dacus, The Shins and Andy Shauf.

The Bridgewater Hall are also looking to showcase Rochdale talent at the sessions from September. Local singer songwriters should contact learning@bridgewater-hall.co.uk

The sessions are also a great way for people to unwind at the end of a busy day, to avoid the busy rush hour period and to hear some great new music.