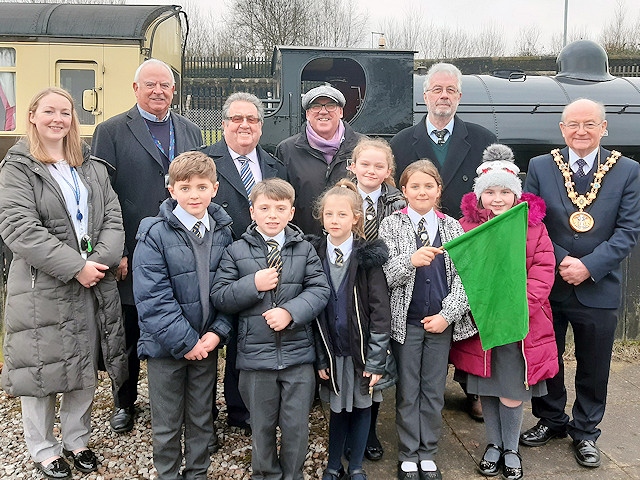 A new road was opened to Heywood Railway Station on Wednesday 29 January, from Manchester Street down Railway Street

This weekly column from the Mayor of Rochdale, Councillor Billy Sheerin, is about the places he has been and the people he has met during the week commencing Monday 27 January to Sunday 2 February 2020.

Held in Manchester Hall on Monday (27 January) morning, it was a very solemn event to commemorate the 75th anniversary since the liberation of Auschwitz. As candles were lit, the most moving part of the ceremony was a speech by Holocaust survivor, Icek Alterman.

Over the weekend on BBC there had been a documentary film called ‘The Windermere Children: In Their Own Words’ of which Icek was one of them. The Windermere Children was a project after the war which aimed to rehabilitate orphaned child survivors of the Holocaust on the shores of Lake Windermere. Icek’s vivid description of what took place at Auschwitz was very emotive and thought provoking. Some of the atrocities made one sick in the stomach and the hairs on the back of the neck stand out.

It’s vitally important that we do not forget the genocide that happened at Auschwitz and it must be made known to future generations just how inhuman man can be to man.

On Tuesday (28 January), I made a civic visit to JD Sports Warehouse at Kingsway Business Park to see their extension which was opened in 2018. We were shown around by Martin White, Group Logistics Director, and Tim Adams, Head of Logistics Development.

The size of the building is mind blowing; orders are dispatched to more than 1,000 stores in the UK and Europe from Kingsway. They are the largest employer in the borough after the council and the NHS.

I really enjoyed the visit and hope that they continue to thrive.

Later on Tuesday afternoon I went to Touchstones for an event ‘Our Cultural Heritage’, put on by Caring and Sharing organisation and sponsored by Action Together and Our Rochdale. The event had four objectives: understanding the different cultures around us, the value of cultures in the community, learning more about cultural barriers and why it is important to be aware of cultural differences.

Thank you to Nikki Olgwoye-Iginla from Caring and Sharing who organised the event. It is important that we acknowledge our diversity and all the different cultures coming into our town that add and bring colour, which must be celebrated.

Tuesday evening, I was invited to Milton Keynes to watch MK Dons v Rochdale AFC. Near the beginning of my mayoral year, in July 2019, I received a kind invitation from the Mayor of Milton Keynes, Councillor Sam Crooks, to make a civic visit to Stadium:MK to watch our local teams play. I accepted, being a Rochdale supporter and the town’s ambassador, and travelled down in the mayoral electric car, causing no pollution.

I enjoyed a nice carvery meal in the boardroom and toured the stadium, which is what I would call ‘state of the art’.

Sadly, due to a very last-minute penalty, Rochdale lost a match that they were winning for a long time, being beaten 2-1 on the night.

The next engagement on Thursday 30 January was a rather special event for me, as it was the opening of Heywood Station from Manchester Street down Railway Street. This is something that the East Lancashire Heritage Railway have wanted to do for a while because it will lift the profile of the station and make it more accessible, and now it is finally open to the public.

Prior to this, access to the railway station was via Green Lane down Cross Street, passing through Southgate Industrial Estate and then you had to make a U-turn into the station entrance, which was too complicated for visitors to the heritage railway.

In attendance for the opening was Brian Davies, the chairman of East Lancashire Railway Trust, Mike Kelly, chair of the East Lanashire Light Railway Company and ELR Trust board member, and Heywood ward councillors Ray Dutton and Peter Rush. Mark Robinson, assistant economy director at Rochdale Borough Council was also there along with other council representatives, plus representatives from VA Whitley & Co Ltd and children from Hopwood Primary School.

It's great to see the investment that has been made to make it easier for people to visit the East Lancashire Railway in Heywood, which is the third biggest tourist attraction in Greater Manchester and is in the top 10 in the North West.

It was a very cold afternoon and we were grateful for the refuge of the Il Vecchio Italian restaurant in Heywood, where hot drinks and refreshments were served and very much enjoyed.

Moving on, I went to the Coach House and Memorial Gardens in Littleborough for a second Holocaust Memorial Service. Organised by Rochdale Borough Multi-Faith Partnership, I was greeted by Robin Parker and Ann Jones, who invited me.

The ceremony started with readings outside at the memorial garden, alongside the holocaust memorial stone, with Rabbi Warren Elf and Iman Irfan Chishti present. We then continued with the event back in the coach house, where readings and slideshow presentations were shown relating to the atrocities of genocide.

I closed the event with an emotional speech and congratulate all those who put this thoughtful event together and attended.

Friday morning (31 January), I was invited to Rochdale Town Hall for a Business Breakfast Forum held in the Clock Tower Dining Room. This event, organised by RDA and the Nigeria Community Association, encouraged new businesses into the borough.

John Searle did a speech on the exciting plans that are ongoing in the township and Carol Hopkins also gave an informative presentation. The Nigeria Community Association provided a speaker, David Smith, who is the chairman of the British African Business Alliance. He explained the opportunities of Rochdale companies exporting to Nigeria, explaining how it was a new and exciting market possibility. This was very interesting, and so were the bacon butties, which I enjoyed!

Saturday (1 February) was the unveiling of a special book in Heywood, commemorating 750 years of the town. I thought this was absolutely brilliant.

I attended the unveiling next to Heywood Library and was amazed at what a wonderful piece of street furniture it is, beautifully constructed by Heritage Street Furniture – a division of Isaac Butterworth (Ironfounders) Ltd, based on Princess Street, Rochdale. Ralph Davis, the sales manager, was present and I congratulated him on this magnificent piece of art.

I finished the week off with another really enjoyable event – I attended an International Food and Volunteer Recruitment Fair at Castlemere Community Centre. I sampled a pink tea at the event which had nuts floating on the top of it, which I have never seen before, but it was very sweet and tasty.

Organised by Crescent Community Radio, I was invited to the event by Tasleem Shahzad who was supported and helped by Zahida and Shabana in making the arrangements. I had a very enjoyable couple of hours sampling all sorts of Asian and African foods. This again was another event which celebrated our cultural diversity.

I want to say congratulations to all involved as it really was a very successful event. My highlight was colouring in with the children at the Hopwood Hall stall. We had to choose a flag and reproduce it which I found fascinating. I chose to draw the Seychelles flag, which is where I wish I was at this time of year!