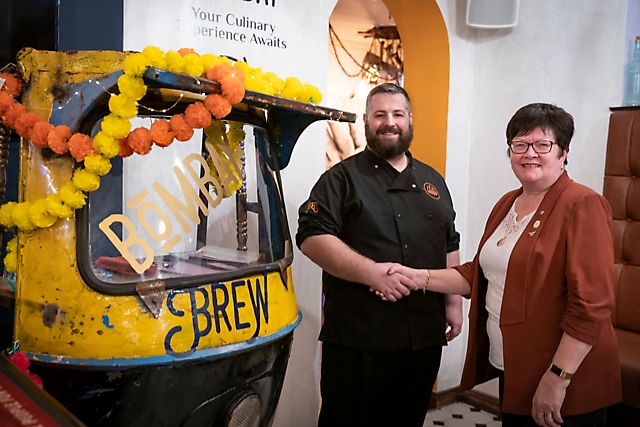 Rochdale’s new arrival Bombay Brew will be spicing up this year’s Rochdale Food & Drink Festival, sponsoring the festival kitchen when the event returns for its third year on Saturday 4 April.

Bombay Brew, an Indian street food and craft ale restaurant, will be trading at the festival itself, selling street food, hosting menu tastings and their head chef, Austin Hopley, will be showcasing his culinary skills in the kitchen, revealing how a couple of their most popular dishes are created from scratch.

The restaurant, based at 1 Drake Street in Rochdale town centre, will also stage festival warm up events in March during the run-up to the event.

Television presenter Chris Bavin will be hosting the festival, also introducing local favourite Andrew Nutter, Tom McNeeney from The Oxford, Adolfus Lewis from The Hare on the Hill in Littleborough and Noo Meenan from Rochdale’s Thai food experts Issan Friends.

The Festival Kitchen will be located inside the gothic splendour of Rochdale town hall along with stalls and activities. There’ll be an outside food and drink village, an indoor seating area to watch chef demonstrations on a big screen plus a live music stage and lots of other activities.

Ben Boothman, owner of Bombay Brew said: “I have supported many local events over the years and this festival is a great opportunity for our latest new venture Bombay Brew. There is already a strong food and drink offer in the town centre and we need to keep on promoting it to as wide an audience as possible, which is why events like Rochdale Food & Drink Festival are so important. We’ve had a busy first couple of months at Bombay Brew and the team are really looking forward to being part of this festival.”

Councillor Janet Emsley, cabinet member for neighbourhoods, community and culture at the council, added: “Having one of our new restaurants on board is a great addition, adding value and expertise to the festival. We are grateful to businesses who support this event, who share our goal of celebrating Rochdale’s wonderful food and drink offer to visitors and locals all year round.”

Rochdale Food & Drink Festival is on Saturday 4 April, open from 11am to 6pm.