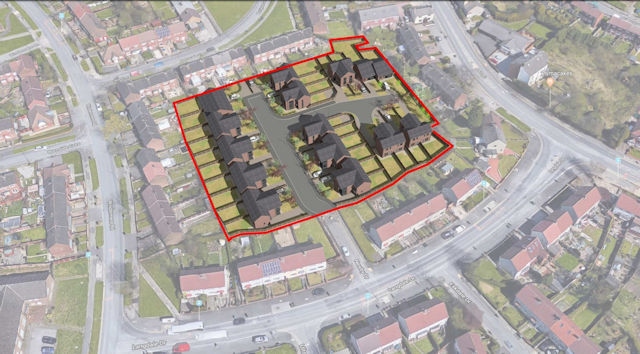 Middleton is to get more than two-dozen new affordable homes after planners gave a housing association’s proposals the thumbs-up.

The 28 properties – to be built off Newby Drive, in Langley – are a mix of one and two-bedroom houses and bungalows.

They will be available for ‘affordable rent’ through social housing provider Riverside, which worked with Rochdale council to develop the scheme.

It is a ‘like-for-like’ development, replacing 28 homes which were demolished around 15 years ago.

Speaking at a meeting of the council’s planning committee, vice-chair Councillor Phil Burke said the homes were ‘much needed’ on the estate.

However, concerns were raised over the impact on residents whose homes will back on to the new properties.

One objector from Bonscale Crescent – who did not give her name – spoke against the application.

She told members how a new road and parking spaces would lead ‘directly up’ to her garden fence, and that of her neighbour.

She said: “The plans show a road going right up to the back of my property with a parking space directly behind my back-garden fence.

“I have lived at the property since March 1993 and have always had grass, garden and privet behind my property. I am very concerned at how exposed my property will become with a road leading straight up to my garden.”

The objector said that her ‘major concern’ was the health problems that could be caused by the air pollution of ‘potentially 56 extra cars’.

She also questioned why more social housing had not been built at the Langley Lane, Hollin Lane and Willow Park developments, rather than on the ‘green space’ behind her home, where she created a wildlife haven some 15 years ago.

This included the creation of ‘hedgehog highways’ and also provides a home for creatures such as bats and dragonflies.

However, the panel heard that – as the 1.7-acre plot had been previously developed, it was classed as a brownfield site.

Keith Bennett, of Riverside’s agents BYA Ltd said the development went a long way to addressing the shortfall of social housing in the area.

He added: “The general layout and design has come about from being sensitive to the surroundings while still trying to maintain a level of development which is sustainable for the housing association.”

Councillor Irene Davidson agreed that Langley had a ‘desperate need’ for affordable housing – but asked Riverside to work with the objector to ensure her quality of life did not suffer once the new homes were built.

Backing the plans for approval, Councillor Burke told the committee: “These are much needed homes on the estate. We have a long waiting list and the [Middleton West] ward councillors fully support this application.

“While we are frustrated to hear the resident’s concerns, we need to move forward.

“This is a massive boost to Langley, to get an additional 28 homes. We have listened to the concerns of local residents and hope Riverside will address the concerns that have been raised and work [with us] in partnership.”

Describing Riverside as a ‘fantastic organisation’ he added: “This is a golden opportunity to have this social housing built, we should not turn it down.”

The application was unanimously approved, although Councillor John Taylor did express his disappointment that Riverside was not considering installing sprinklers – as per a fire service recommendation – or electric vehicle charging points.