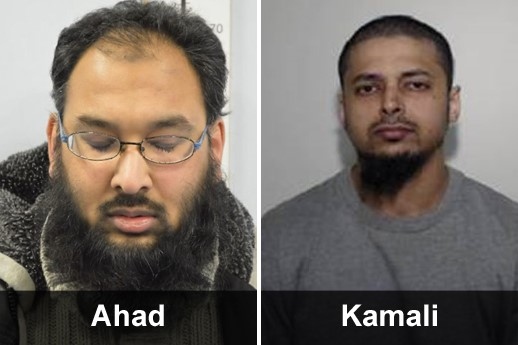 A Rochdale man has been jailed after distributing terrorism-related material on an Islamist propaganda website.

Counter Terrorism Police in both the North West and North East, along with the Metropolitan Police Counter Terrorism Command (CTC), worked together to disrupt an Islamist propaganda website for Daesh supporters by bringing to justice two of its main administrators and contributors: 31-year-old Muhammad Abdur Raheem Kamali, of Rochdale, and 38-year-old Mohammed Abdul Ahad, of London.

During a six-week trial, the court heard how Kamali and Ahad recorded religious speeches made by Islamic hate preacher Sheikh Abdullah el-Faisal. El-Faisal was previously convicted for terrorism-related offences in 2003.

The pair would type, edit and prepare the speeches so that they could be uploaded to the website - a significant number of these speeches glorified terrorist organisations including Al-Qaeda and Daesh, and encouraged support for acts of terrorism.

Kamali and Ahad first came to police attention in 2016 when CTPNE investigated a 20-year-old woman and her links to the dissemination of terrorism-related documents on the website and on a linked Facebook page. During this investigation it was discovered Kamali and Ahad were web managers who had edited and published a number of these and other documents.

Following this, the pair were simultaneously arrested in Rochdale and London on suspicion of terrorism offences and brought into custody. Officers searched their addresses and seized a number of digital media devices, evidence from which confirmed that Kamali had been the website’s lead administrator and owner since 2011. Both suspects were subsequently bailed for enquiries to continue.

Muhammad Abdur Kamali, 31, of Rochdale was found guilty of four counts of section 2 terrorism act (dissemination of terrorist publications) and on Friday 7 February 2020 he was sentenced to four and a half years in prison.

Mohammed Abdul Ahad was also sentenced to four and a half years in prison after previously being found guilty of four counts of section 2 terrorism act (dissemination of terrorist publications) and one count of section 58 terrorism act (possession of a document or record likely to be useful to a person committing or preparing an act of terrorism).

Speaking after the case, Detective Superintendent Will Chatterton, head of investigations at Counter Terrorism Police North West, said: “Today’s result is a culmination of hard work and dedication by different Counter Terrorism Policing teams from across the National Counter Terrorism Network. I hope this reassures the public that we are unified in our approach to tackling this form of hatred and remain absolutely committed to putting a stop to the incitement of violence and terror in all of its abhorrent forms.

“I also hope this sentence sends a clear message to those thinking about engaging in online support for terrorist organisations. Across the Counter Terrorism Network we will continue to work to identify and prosecute those individuals who are actively engaged in the online support of terrorist organisations. I would also like to take this opportunity to remind members of the public that they are often one of our biggest advantages in combatting the threat of terror. So, if something doesn’t seem quite right, please get in touch with us - communities defeat terrorism.”

Commander Richard Smith, head of the Met’s Counter Terrorism Command, said: “I am very pleased with today’s sentences. Two publishers of harmful extremist material have been jailed for a considerable time.

“The Met works with other police forces and security services to provide a counter terrorism network, both at home and abroad, whose strength and effect is continually felt by those who conspire to commit acts of violence and terror.

“Today’s result was a direct consequence of that network. We quickly identified the two offenders in different parts of the UK as online publishers of toxic ideologies which promoted terrorism and encouraged its readership to join Daesh in Syria.

“We take the dissemination of this type of material incredibly seriously and we will prosecute anyone involved in such illegal activity.

“Police rely on information from the public and I would remind everyone to remain vigilant and report anything suspicious to police, whether that be online or in the real world.”

You can get in touch to report anything suspicious confidentially by ringing 0800 789 321 or via:

In an emergency always call 999.